Who looks at the music player window while listening to music? I don’t, and I’m sure you do not too. I listen to music when I‘m working, the music playing softly in the background. To change tracks and adjust volume I use the dedicated media keys on my multimedia keyboard. If you are like me, you don’t need any flashy GUI to control playback on your music player.

Meson Player is a very convenient music player that has no graphical user interface to speak of. No, it’s not a command line music player. It’s a proper Windows program – it just doesn’t have a player window with playback controls and playlists, yet it supports everything. When the player is running, you see an icon in the notification area in Windows – also called the system tray. From the notification tray icon, Meson Player notifies you about track changes via balloon pop-ups. Right-click on the icon and from the short menu you can enable Shuffle, disable hotkeys, open the current playing file in Explorer or quit the program. 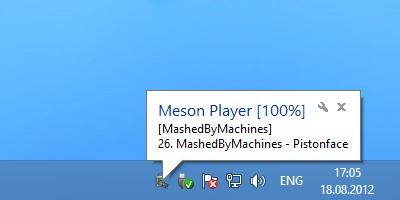 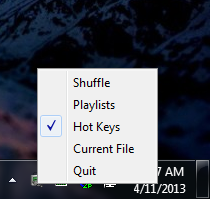 To start playing songs in Meson Player, right-click on the folder with music and from the context menu, choose “Open in Meson Player”. The player will launch in the background and immediately start playing all music within that folder. To switch tracks, adjust volume and save/load playlist, you use hotkeys that work globally across Windows.

Here are the hotkeys used to control Meson Player

Multimedia keys on supported keyboards also work. If you have a multimedia keyboard, you can use the media keys and no need to memorize the Numpad hotkeys.

To use your existing playlists (created by other music players), you have to move them to the playlist folder and rename them numerically (1.m3u, 2.pls etc.). Meson Player supports M3U, ASX, XSPF, PLS, WPL playlists formats.

Meson Player supports a lot of music file formats and even Shoutcast Internet radio stations. To play a Shoutcast station, first get the station’s ID from the playlist URL ("id=xxx" part). Then hold CTRL and type that ID on a NumPad prefixed by "0". For example, to load "NSB Radio" station, hold CTRL, then type 01267769 on your NumPad.

Settings for Meson Player are stored in settings.ini.template file in the program’s folder in plain English. These can be changed to change the behavior of the player. For example, you can change the hotkeys, hide the tray icon, enable surround sound, auto-resume last playing audio file, and more.

Meson Player is an interesting player that is definitely not for everyone. If you love minimalism, and prefer keyboard over mouse, you may like it. The program is open sourced, and supports all three major platforms – Windows, Mac OS and Linux.