The other day I reviewed a few photo organizing software, that helps you organize your pictures by moving them into appropriately named folders in your hard drive. Phototheca is a different photo organizer. Rather than physically moving files, Phototheca creates “virtual” albums of your pictures and then lets you view them by date, events, keywords and more.

The first step towards using Phototheca is importing your pictures. Importing pictures only imports the information about the pictures, such as their location on the disk and EXIF data. No matter how you organize and move photos inside Phototheca’s library, the actual photo files stay on disk in their original locations. However, when you import photos from memory cards, or any other removable drives Phototheca understands that you would probably like to get these photos copied to your local drive as well and does this automatically. Photos imported previously are automatically recognized by Phototeca and are not copied to your drive again so that you don’t end up having duplicates. 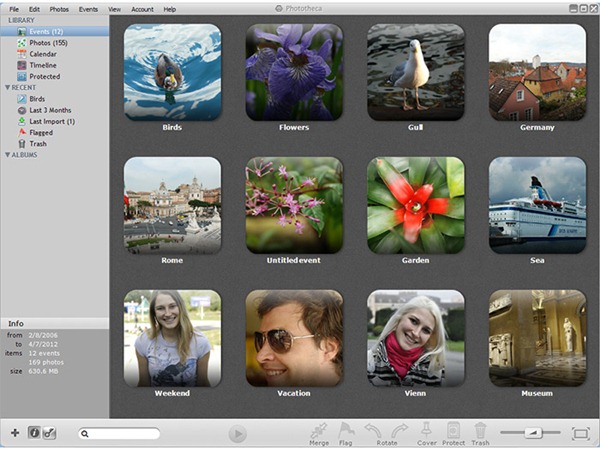 Imported pictures are automatically organized into Events, which are virtual folders containing pictures taken during a particular day. An event can spill into multiple days, such as a week-long vacation, in which case, you can select multiple events and then merge them together into one event. The opposite is also possible. Sometimes an event may not run the course of an entire day, such as a birthday party. In this case, you can spilt an event into multiple events.

Aside from Events, you can create Albums, which are user defined virtual folders containing hand picked collection of pictures. You can also create “Smart albums” that automatically update based on criteria you define. For instance, you can have a smart album containing pictures taken between two dates of a calendar, or pictures taken by a particular camera. You can also create, within an album, simple folders to organize pictures into complex hierarchical structures.

If you intend to use the search tool later, you can tag your photos with keywords. Keywords are written into JPEG file according to IPTC standard, so they can be accessed from other applications, windows explorer and photo hosting sites. If you already have photos with assigned keywords they will be recognized during the import and will appear in your library automatically. 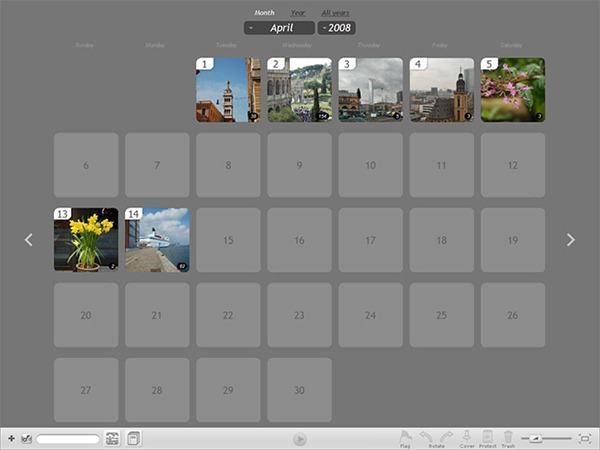 To view pictures, open an Event or Album and then use the arrow keys to cycle through the pictures or use the Slideshow viewer. The Calendar view is another interesting way to view pictures. In this mode all your photos are represented in a calendar, where you can scroll back and forth and switch between months or year.

One of the things I liked about Phototheca is that if hover your mouse pointer over an Event/Album folder, and then move the pointer slowly across it, the folder thumbnail changes, cycling through various thumbnails derived from pictures contained within the folder. This allows you to catch a glimpse inside the folder without actually opening it.

Another notable feature is finding of duplicates. Phototheca does this automatically when photos are imported into the program. You can then choose which pictures you want to keep and which to delete.

Over all, it’s a nice program, but the viewer could have been better if it could show EXIF data.