Google today announced that it will merge the storage space offered on several of its services into one that will be shared among them. This means that instead of having 10 GB for Gmail and another 5 GB for Drive and Google+ Photos, you’ll now get 15 GB of unified storage for free to use as you like between Drive, Gmail, and Google+ Photos.

The new combined storage space is likely to benefit many users who have more photos to share than emails in their inbox. 10 GB for email is way too much space for the average user, whereas 5 GB is not enough to store your files on Drive and share pictures on Google+. With new combined storage space, you won’t have to worry about how much you’re storing and where. This also works the other way round. You may be pushing the 10 GB mark on Gmail but have plenty of space left in your Drive. Previously, you would have to buy additional storage or delete old mails to make room for new ones. Now it doesn’t matter, because you can use your storage the way you want. 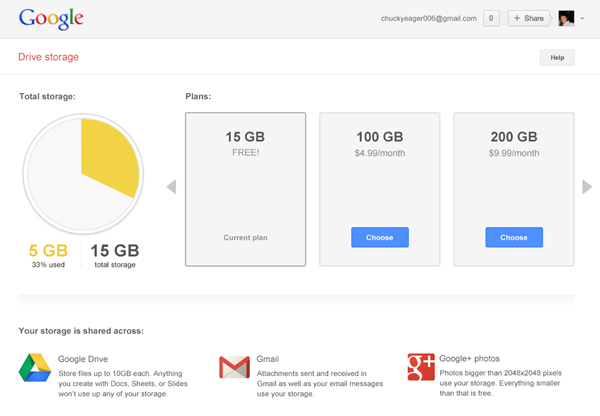 Google also removed the 25 GB upgrade plan they had previously and replaced it with 100 GB which starts at $4.99 per month.

Google Apps users will also be getting shared storage of 30 GB shared between Drive, Gmail and Google+ Photos.

Google says the changes to Google Drive storage will be rolled out over the next couple of weeks.