Google has added a new feature to YouTube Video Editor that lets anybody create slow-motion videos out of regular videos with “normal” frame rates. Ideally, slow motion videos are shot using cameras that are capable of recording videos at frame rates higher than 25 fps or 30 fps. When this video is played back at the normal playback speed of 25/30 fps, the video appears to slow down in time. The higher the recording frame rate of the original video, the slower it could be play backed without introducing stutters and jerky motions between frames. So, if the video was shot at 60 fps, you could slow the video by half and thus elongate its duration by a factor of two. Similarly, if the video is shot at 120 fps, you could slow it down by a factor of 4.

Some consumer grade cameras today can record in 60 fps and higher, by compromising on quality and resolution, but true high speed, high definition cameras are expensive. One way to produce high speed videos without a high speed camera is to ramp up the frame rate in post-production. (It’s amusing to note that the terms “high speed videos” and “slow motion videos” denote the same thing, even though semantically they are the exact opposite.)

YouTube has added such a post-production trick to its built-in video editor that allows anyone to produce slow motion videos out of any regular-speed videos. To do this, open YouTube Video Editor (make sure you are signed in to your Google account), and select any one of your existing videos to try this on. Alternatively, you can upload a new video or search from among thousands of creative common videos already present on YouTube. 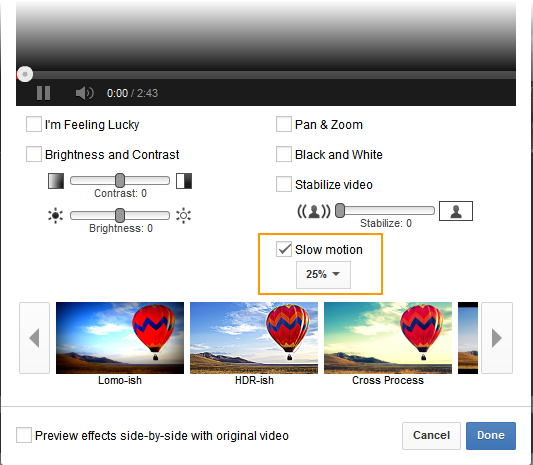 Once you’ve found a video, drag it to the timeline editor, and then click on the Edit icon. In the editor window that open, check the box “Slow motion” and from the drop-down menu select a speed. Available ones are 50%, 25% and 12.5%.

Using frame analysis and extrapolation, YouTube will attempt to create a smooth slow motion video out of it.

As you can notice, there appears some weird artifacts around the guy walking. The moving cars on the other hand appears extremely smooth. Apparently, as long as the video doesn’t contain fast moving objects, the results can quite good.