One of the things that draw people to Instagram is the huge number of filters that are available to the users. These filters, when applied to a photograph, recreates effects or rather defects that were typical of vintage photos like fading, vignetting, and light leaks. Recreating these effects on an image editing software requires skill, something which Daniel Box discovered when he attempted to reproduce them in Adobe Photoshop. Thanks to Daniel, we now have nearly two dozen Instagram effects in the form of Photoshop actions that can be applied straight to any picture, if you have Adobe Photoshop.

XnRetro is another desktop program dedicated to giving your pictures that old, spoiled look. XnRetro doesn’t try to mimic Instagram’s filters. Rather, they have their own set of filters and retro photo frames. In addition to Windows, Mac OSX and the Linux desktop, XnRetro is also available on the mobile platform. Users of iPhone and Android devices can install it from their respective app store. 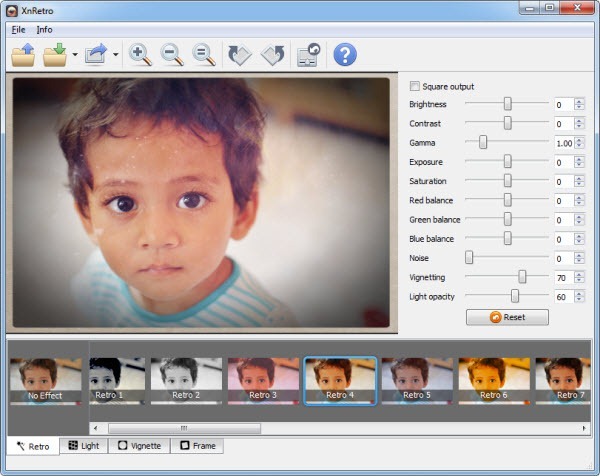 In XnRetro, you can apply four kind of effects and these are grouped into four different tabs at the bottom of the program window.

You proceed from one tab to another choosing and applying a filter of your choice. If you don’t like the look, you can return back to any of the tabs to change the filter later.

On the right of the image preview, you will find various sliders that lets you make adjustment to the image independently of the filter that you have applied. However, when you make adjustments to exposure, saturation, and the balance of the 3 primary colors, and then apply a filter, the effect will be compounded, as these filters are nothing but color and brightness/contrast adjustment of the image. The advantage is that it gives you precise control over your image. If you do not like the way a filter looks, you can enhance or lower the effect of the filter by adjusting these sliders.

The last two sliders, Vignetting and Light opacity controls the amount of vignette and the strength of the light leak filters, respectively. There is also a Noise filter to add grains to the image. The “Square output” tick box at the top controls whether the image will be cropped to a square during framing.