Freemake Music Box is a streaming music player and online jukebox that lets you find and play music tracks over the internet. The software which initially came out as beta in December 2011 has only recently been released as a stable version. The company behind Freemake Music Box – Ellora Assets Corporation – boasts of 42 million audio tracks in the library. These tracks are sourced from YouTube, and possibly YouTube alone. This makes Freemake Music Box basically an interface to YouTube but designed for music streaming only. Freemake wants to keep the software free and legal, so no downloading of tracks is allowed. 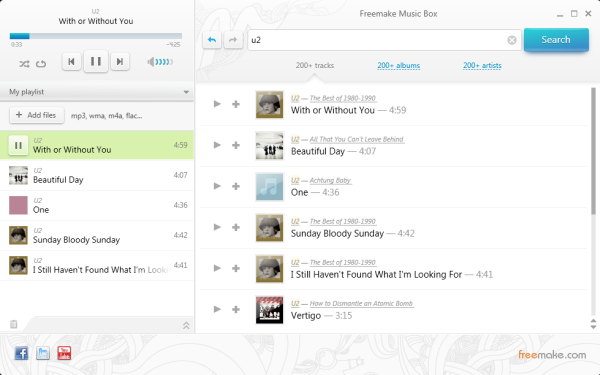 The program has a simple and uncluttered interface just like any of Freemake’s other products. You can search by song title or artist and the program will list all tracks found. You can filter the results by album and artist. To play a track, just hit the play button or build a playlist by clicking on the + button. Playlists can be saved for future play back. You can import your existing playlists from other music players such as Winamp, AIMP, Windows Media Player, VLC, etc. Freemake Music Box can also play your local stored music files.

As of now, the software is very basic, but the developers promises more features in future versions such as playlists synching, support for portable devices – Android and iOS, and a way to save playlists online so that they can be accessed from any machine or device on the go.