Updating drivers is fairly easy in comparison to updating software, because there are only a handful of devices that needs manufacture specific drivers to function. You need drivers for the display card (also called graphics card), the motherboard, network, Wi-Fi, sound, and probably one or two peripherals you may have. The rest of the devices/peripherals are mostly plug-n-play, meaning you can plug the device and play with it. Forget drivers.

Often, all you need to do is open the optical disk drive, pop-in the DVD and run the installer. The installer file on the DVD takes care of everything. If there is no DVD or if the drivers on the DVD are old, simply go to the manufacturer’s website and download the latest package. Of course, you need to know the model number or device ID of the hardware who’s drivers you wish to update.

This may sound scary for some, which is where automated driver-updating programs drop in.

In the past, I wrote about DriverZone and even earlier, a tool called Driver Magician which is no longer free, unfortunately. There is a new one from IOBit called Driver Booster. 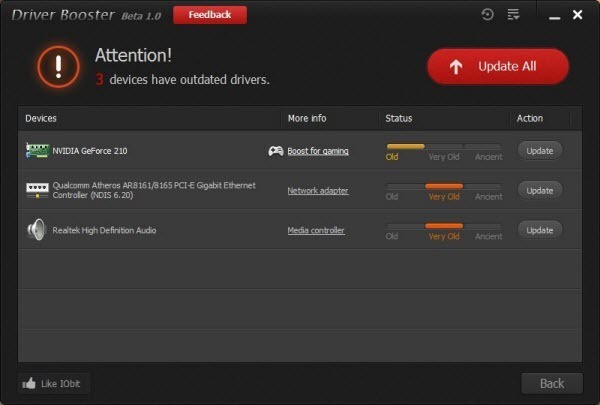 The program scans the user’s system for devices and the drivers that are installed. It then checks the internet to find out whether the hardware vendor provides newer version of the driver currently present on the system. If the program finds new drivers, it tells the user which ones need updating using classifications such as old, very old and ancient.

The user can then click on the Update button next to each new driver found, and the program will automatically download the said driver and proceed to install it on the system.

Note: There is an old adage, which I’m sure you’ve heard a thousand times before: “Do not fix what is not broken”. This is true for device drivers. An old hardware doesn’t necessarily need new drivers, and new drivers won’t necessarily improve performance of an old hardware. Most driver updates contain nothing but bug fixes with no new feature. If the old ones are stable and not causing you troubles, updating drivers to the most recent version is certainly not going to fix problems you don’t have.