BZR Player is an audio player, or “sound player”, as the developers like to call it, whose primary goal is to play as many different audio file formats as possible, even non-standard ones like those used to pack music data in video games. Currently it plays over 480 different formats. Supported formats includes numerous audio files as well as formats used by hundreds of video games of consoles like Amiga, Atari, Nintendo, C-64, PlayStation, XBOX, WII, and many many more.

Video games pack music in special containers that cannot be played back in a normal music player. These formats are, however, very common among games of certain platforms, such as the .NSF extension is used by music in Nintendo games and .MED is used by many Atari games. Other game developers use propitiatory formats, for example, Unreal Games use the file extension .UMX to pack music data while Eidos Interactive have their own .EMFF extension. 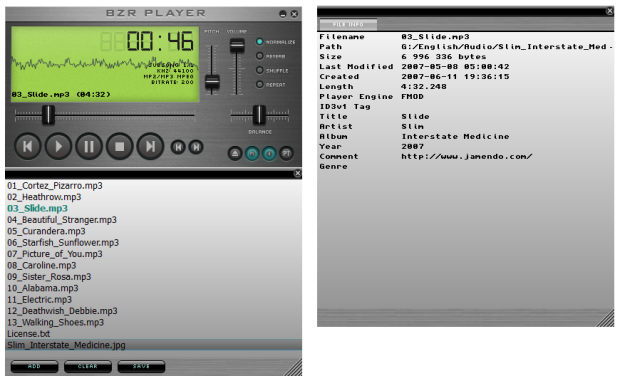 BZR Player can play all these files. In fact, BZR Player can play files even if the file was saved with the incorrect extension. As long as the data is playable, it ignores the extension. So you can take an MP3 file, for instance, and save it as song_name.whatever and it will still play perfectly fine. What’s more, it will even play audio files that are compressed inside archives such as rar, zip, 7-zip, lha, atr, gzip, bzip2 etc.

BZR Player includes multiple engines to handle all these formats, and you can even tweak the engines a bit from the settings window. 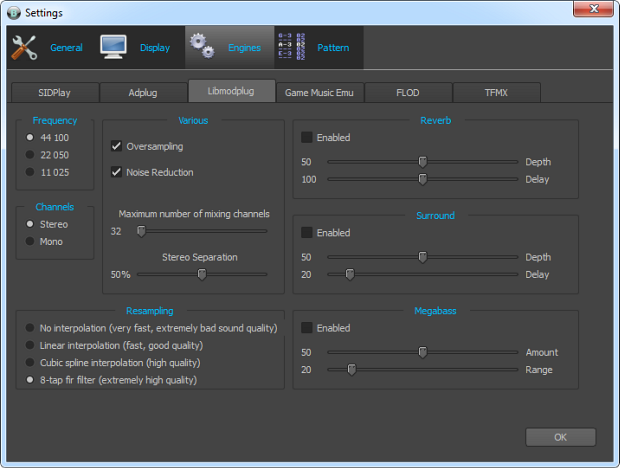 BZR Player looks like any typical music player with controls, seekbar and display on the top panel, and a detachable playlist window on the bottom panel. An additional file information panel can be enabled that docks to the right or left of the main player window. The info panel can show MP3 tags (id3v1 and id3v2) and instruments, samples, patterns etc.

On the top panel you can see buttons for Normalizer, Reverb, Shuffle and Repeat. The real time normalizer makes all sounds play with the same level of volume eliminating surprises caused by sudden loud playing audio files. The Reverb button gives a nice reverb effect and is suitable mostly for old C64/Amiga sounds for example since they can sound a bit "flat" otherwise. Shuffle and Repeat buttons, as you already know, control the playback of the playlist. Another slider controls the pitch of the playing audio causing it to play faster or slower than the normal speed.

BZR Player has no fancy visualization display but shows a lot of geeky information in the “Pattern” window. The Pattern window displays the currently playing notes in some kind of a format that I’m not quite sure. Notes can only be seen for supported audio files such as AHX, HivelyTacker, Screamtracker 3, Digi Booster, Star Trekker, Game Music Creator, Sound/Pro/Noise Tracker, Ice Tracker.