From Cupcake to JellyBean, Android has gone through numerous iteration over the course of 5 years of its existence, but one very basic thing hasn’t changed – it still doesn’t show the battery’s power status in percentage in the notification bar. Android shows the remaining power left in the device’s battery as an icon in notification bar that doesn’t include the information in a readable format. One has to guess the power level by either counting the bars in the battery icon or by judging the length of the progress bar. Since the battery icon is often tiny, it is possible to make only a rough estimate of the remaining power level. 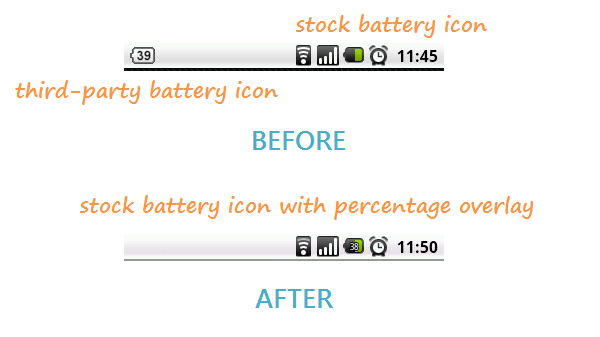 Battery Overlay Percent is a free app for Android 2.1 and higher that avoids this (the problem of two icons) by displaying the battery percentage as an overlay over the stock battery icon. This way you have only one battery status icon, instead of two, and by doing this you save space in the notification bar.

When you install and run Battery Overlay Percent for the first time, it will try to estimate the position of the stock battery icon and display the percentage over it. If the percentage overlay is not correctly positioned over the battery icon, you can adjust its position (left/right and up/down) as well as it’s size, color and visibility.

Battery Overlay Percent requires no root and should work on all devices.