Animated GIF was invented in 1987, and despite its age, is a format that is still widely used on the web today. Back in the early days of the world wide web, it was fashionable to use animated GIF images as decorative elements on web pages. Over the years, they evolved into something more artistic and found use in other areas such as humor and entertainment. Popularity of animated GIFs renewed in recent years with the rise of memes and the so called “reaction gifs” popularly used in message boards and sites like Reddit.

Most animated GIFs used today are derived from video clips. QGifer is a near perfect video to GIF converter that allows you extract part of a video file and convert it into an animated GIF image with plenty of options for editing and customization.

Start by loading a video file into the program. The video file should be of one of the following formats – AVI, MPG, MP4 and OGV. The video is displayed in the video preview panel on the right. The playback controls are at the top, along with numerous buttons for editing the animated GIF. 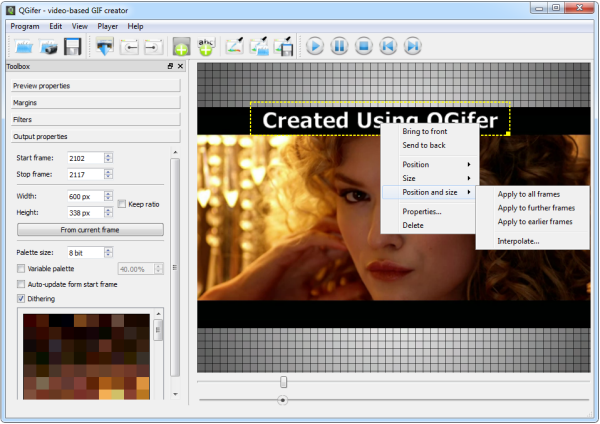 To extract a part of the video, you have to select the start and stop frame of the animated GIF. The easiest way to do this is to playback the video to the desired part, and then pause it. Use the “previous frame” and “next frame” buttons (or the left/right keyboard arrow keys) to move the video backward or forward frame by frame until you arrive at the precise frame you want to use as the start frame for your animated GIF. From the Edit menu, click on “Start from the current frame”, to mark the current frame as the start frame.

Repeat the above procedure to locate the end frame, only this time click on “Stop at current frame” on the Edit menu to mark the end frame of the video.

You can also select the start and stop frame by directly entering the frame numbers in the Output Properties box, or use the start and end sliders at the bottom of the video preview window.

Keep the video clipping short otherwise the resulting animated GIF will be too large in size.

Under the various editing toolboxes on the left, you can specify the width and height of the GIF image, set margins or get rid of them, make color corrections (hue, saturation and brightness) and optionally, add a median blur. You can set the frame rate, zoom, if necessary, and decide whether you want the animation to loop or not. 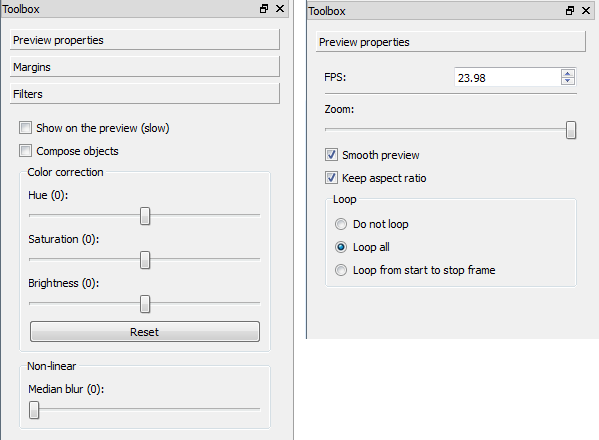 An animated GIF is incomplete without a caption, especially if you intend to use it as part of a meme. QGifer allows you to add text and other images as objects to the animated GIF. These can be dragged and resized, and applied to a single frame or all the frames.

Before you hit the “Extract GIF” button, there is one last step – update the color palette using the “Update palette” action in Edit menu. This will keep the original colors of the video clip in the animated GIF image. Failing to do this will result either in a black and white animated GIF or a GIF with poor color reproduction.

After the GIF has been extracted, it will playback a preview. Here you can append a reverse copy of the GIF to avoid the sharp transition that occurs when the last frame ends and the first frame starts as it loops. You can also add a pause interval between the original and reversed copy. To fasten the playback and shorten the video duration, you can choose to skip frames. Once you are done, click the Save GIF button to save the animated GIF.