Small software developers often try to generate revenue from their free software by bundling third-party software as well as display advertisements into the installer. These third-party software serve no useful purpose other than try to push the user into paying for something they don’t need, such as Windows registry cleaners. Then, there are browser toolbars whose purpose is to gather data about the user’s browsing habits such as the websites they visit, search engine they use and the queries they make. What happens to the data is anybody’s guess. Occasionally, there would be malicious programs that harm the system or consume inordinate amount of resources that makes the computer less responsive.

These programs are not difficult to remove. Unlike, malware they usually make no attempt to hide or obfuscate their executables. You can find them listed plainly under “Programs and Features” tool in Windows’ Control Panel and can identify them from their names. If you have tons of crapware on your computer (maybe your kid downloaded too many smilies or free games), and you don’t have the time to manually uninstall each and every program, you can try uninstalling them by keywords.

To do this, we will use a free and open source batch script called Crap Killer. The script searches through the registry for installed programs and makes a list of useless ones based on their names. Then it automatically uninstalls them using msiexec.exe or, if that’s not an option, using their built-in uninstaller.

Crap Killer contains a list of keywords that are commonly associated with crapware. These keywords can be edited by the user by opening the batch script in a text editor of their choice, making the necessary edits and saving the changes. 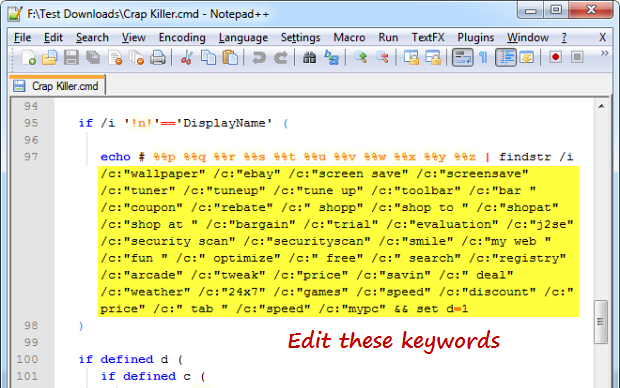 The keywords that Crap Killer looks for in the registry are as follows. They appear on line no#97 on the batch script.

You will notice that some of these keywords are potentially “dangerous” in the sense that they can affect legitimate programs. For instance, the string “free” often appears in the names of many great freeware such as those developed by “Freemake” and many others, as you can see from the screenshot below.

Similarly, the string “speed” will flag “Need For Speed” as a bad program, while “weather” and “wallpaper” will attempt to uninstall any innocent weather and wallpaper changing program you may have. Herein lies the real problem with the script – Crap Killer will uninstall all programs that returns a positive match for any of these keywords, without warning or confirmation.

It is recommended to edit the list of keywords before you run it. Remove problematic keywords like “speed” and “free”, and add genuine offenders like “AOL” and “WildTangent” to further enhance the function of the script.