People generally are obsessed with wealth. We are curious how much movie stars make or how much a company is worth, and eagerly pour over the annual “richest people” list. The other day, the Credit Suisse Research Institute released their Global Wealth Report for 2013, that reveals the global wealth distribution pattern together with some fascinating facts. Take the following for example: the wealthiest 32 million individuals (just 0.7% of the world’s population) together hold 41% of global wealth. In contrast, only 3% of global riches belong to the poorest 3.2 billion, despite representing 68.7% of the world population.

Figures such as these make the average people feel poor, because we always gauge how rich we are by looking upwards at those who have more than us. But if you could know where you stand globally, you will realize that, most of us (who are able to view this web page) are, in fact, in the privileged minority.

The Global Rich List website tells you where exactly you stand. Created by London-based agency Poke, GRL asks users how much their yearly salary adds up to, and then let’s them know what percentage of the world’s richest people they fall in. You might be surprised to find how high you rank.

But before you go bragging, let’s put something in perspective: according to Poke, a family of five living just above the poverty line in the U.S. represents the top one percent compared to the rest of the world. Of course, numerous other factors, like high volumes of debt, weren’t taken into consideration with that statistic, but it’s still jaw-dropping none the less. 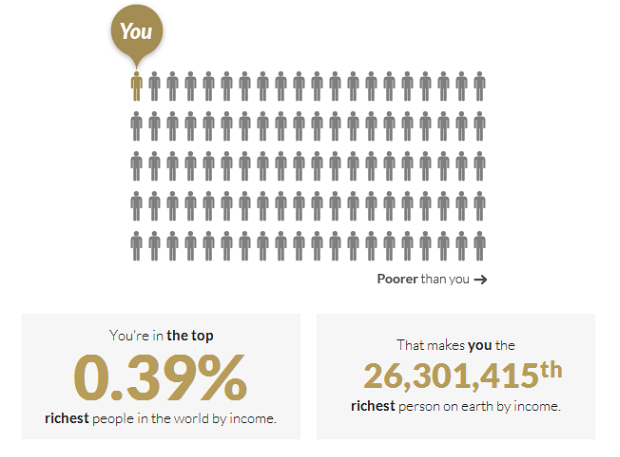 Keep in mind that income and wealth are two different things, and therefore, Global Rich List offers ranking by both. To get an accurate ranking for wealth, which is a lot harder, you have to estimate your net worth, which is everything you own (value of your house, assets, shares, income, bank balance, belongings), minus anything you owe (mortgage, debts, student loans), and plug that data into the calculator.

To calculate where you stand financially in relation to the rest of the world, Poke uses statistics from the World Bank, based on household surveys, and estimates from Credit Suisse. In order to take into account the difference in cost of living between countries, Poke made use of Purchasing Power Parity Dollars (PPP$).

Aside from showing which group you belong to, Global Rich List displays related data like how much you make per hour, along with statistics of individuals from other countries for comparison, such as how many years a laborer in Indonesia will have to work to earn the same amount, and how many doctors in Kazakhstan could be paid from your salary. Just goes to show how bad the living conditions for most of the people in the world are.