In an effort to clean up the notoriously awful commentary that appears under nearly every successful video, Google has been pestering YouTube users who are logged into their respective accounts to use their real name. This has been going on for more than a year, long enough for some people to start losing their nerves.

The “real name" is taken from the person’s Google+ account since Google requires anybody signing up for an account on Google’s social network to use their real name. This name then appears whenever the person uploads a video or writes a comment on YouTube.

The idea is to discourage users from leaving vile, incoherent and racists slurs under the veil of anonymity, because any senile person – so the argument goes – would not like to publicly associate his or her name with something so nasty. Whether this step has caused any significant improvement in the discourse in YouTube’s comments section, is open for scrutiny. I’ll just leave here a link to a list compiled by Gizmodo. 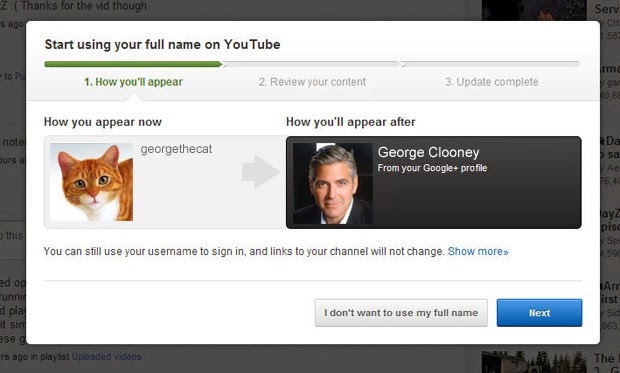 The real-name policy has sparked a debate that’s been going on ever since. There are valid security reasons for people not using real names, ranging from privacy concerns to real threats such as stalking. Already enough complains have been lodged on YouTube’s support forums by those who are concerned or opposed to using their real names on their accounts. One thread that has accumulated 266 posts at the time of writing, bears the petition:

This practice of asking users to display their full names undermines the privacy expectations of your users, leaving them vulnerable to being traced by criminals and other internet predators. This practice also (in some instances) grants certain Copyright claimants, such as Viacom, accessible knowledge of the individual users on YouTube, enabling the claimants to invasively and illegally seek out individuals for Copyright Infringement. And this practice potentially exposes you, who seeks to display this information, to unanticipated legal liability.

To trouble is, YouTube keeps asking this question frequently and does it with a blocking pop-up dialog. No matter what answer you choose, the dreaded pop-up will appear again in a matter of weeks.

Reddit user dmurrow_ shares a trick that lets users get rid of the pop-ups on YouTube for ever.

If you use the Adblock extension to block advertisement on websites, open the extension’s filter settings and add the following URL to block.

And while you are at it, you may also want to add the URL below to block YouTube annotations.

Hopefully, from now on, you will stop seeing the prompt asking you to use your real name on YouTube.