When authorities shutdown Megaupload and arrested Kim Dotcom for abetting copyright infringement last year, they didn’t realize they were stirring up the hornet’s nest. Within weeks, Dotcom’s file sharing service was up in a new avatar. Simply called MEGA, the new cloud storage company’s primary focus is on user’s privacy and security of their data. MEGA has always been in the news ever since, and Dotcom saw to it, never missing an opportunity to speak out against those who brought down his previous company.

Cloud storage is more or less a saturated business, dominated by the likes of Dropbox and SkyDrive, with two dozen smaller players vying for a bigger piece of the pie. So, what new does MEGA brings to the table? For start, a hefty 50GB storage space for free user, and the ability to synchronize multiple local folders to respective folders in the cloud. The last thing is possible via MEGA’s desktop synchronization client for Windows that’s just been spotted in the wild. The client program, that’s currently in beta and for which there is still no official announcement, is a basic affair. The wizard like interface guides you through the three simple steps that includes signing into your MEGA account, setting up your local folder and then setting up the remote folder, called “nodes” on MEGA.

The client provides you an option to register a new account, in case you don’t have one, but that feature is not working at this moment.

Once MEGASync is up and running, you can open the control panel from the program’s icon in the notification tray and adjust upload bandwidth, configure proxies and set up additional folders. This is big feature of MEGASync. You can add as many local folders as you want and have each of them synchronize to a different folder or node on your MEGA account. You aren’t tied to a root folder like other cloud storage providers make you do. 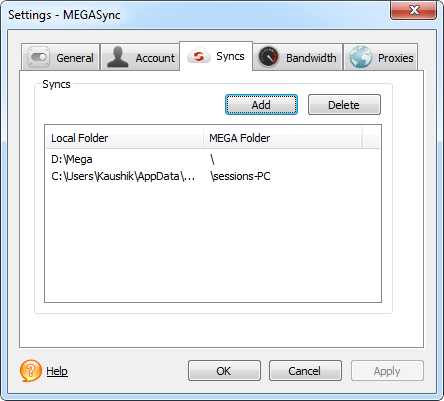 Other thing like bandwidth control helps when there are other processes running that shares the same internet connection. You can also temporarily pause synchronization if the need arise.

Although it comes with the “beta” tag, it’s pretty stable as far as I can tell. You can download MEGASync from this page.