There are thousands of book stores on the internet that will sell you used books for cheap. If their business is in the same country as yours, you can even avail free shipping, or at least, a reasonable shipping rate. Book lovers from the United States and the United Kingdom are typically at advantage here because a large of number of publishing houses and book stores operate from these countries. But for international addresses, the cost of shipping is usually high enough to prohibit buyers from taking advantage of their services.

Take Powell’s for instance, a bookstore based in Portland, Oregon, the U.S., with literally millions of titles in both books and DVDs. They ship within the United States for $3.99, and for orders above $50, shipping is free. But for international deliveries, the shipping charges are $7 per shipment + $5.99 per item, which amounts to nearly $13 for one book. For each additional book you pay 6 dollars more. It doesn’t make sense to buy used from Powel’s if your total expense exceeds the price of a new copy. It’s the same story with Amazon’s used books marketplace, and Alibris, another U.S. and U.K. based bookstore that charges $15 per book just for shipping. 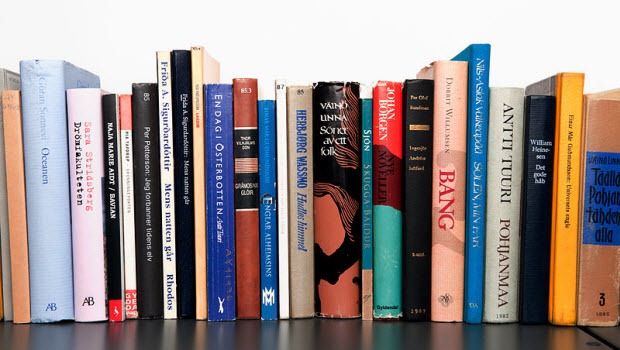 Bookstores that offer free shipping worldwide are rare, but they exist. Also exist are stores that charges a nominal fee for shipping the package to you. If you are looking for a used book, head over to these places.

Better World Books is an US-based bookseller that sells both new and used books, and is one of the only two online bookstores that offer free international shipping. Their inventory comes primarily from regular donation drives conducted at over 2,300 colleges and universities and donations from over 3000 library systems, in addition to donation boxes installed on corners and on college campuses. 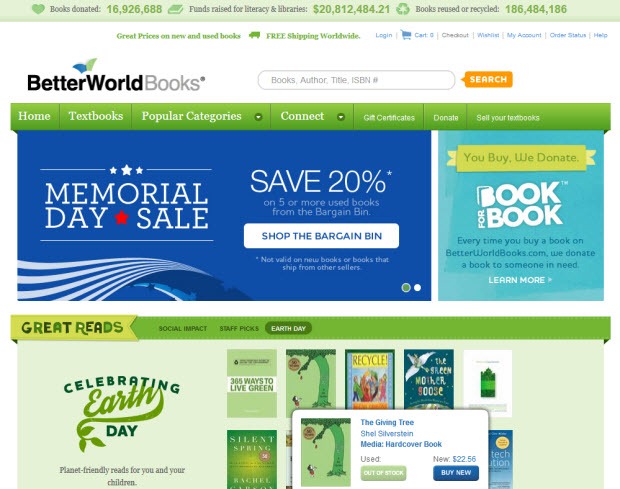 Better World Books also donates a percentage of profits earned from each book sale to causes related to literacy and education. Since its founding in 2002, Better World Books has recycled 186 million books, at the time of this writing, amounting to an estimated $20 million in donation.

As for the books, you will find most current best sellers as well as classics and literary books. Textbooks are also available. Better World Books also sells DVDs and audiobooks.

Book Depository is a UK-based online bookseller with a large catalogue and offers free shipping all over the world. The store was originally founded in 2004 and was later acquired by Amazon.

Book Depository has a decent collection but the used books are not always cheap. You can hope to save an average of $2 to $4 per book, but it can even be as low as 50 cents, so it might not be worth all that much.

Update: As of July 2016, Book Depository has stopped offering used titles. Their entire inventory now consist of new books. You can still avail free shipping though 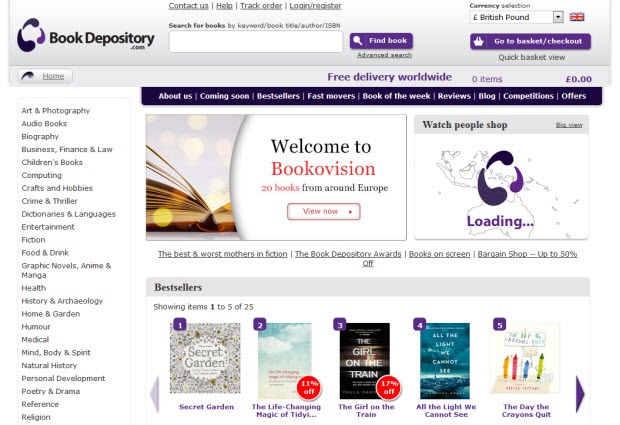 Thrift Books is the largest of the used book sellers in the US and parent company to a number of subsidiaries. The company salvages books from charity shops, libraries, schools and colleges, bringing in on average 15 semi-trailer trucks full of used books every day to his warehouses. The store has recycled more than 400 million books since its founding ten years ago, and currently stocks 7 million titles ready to sale. 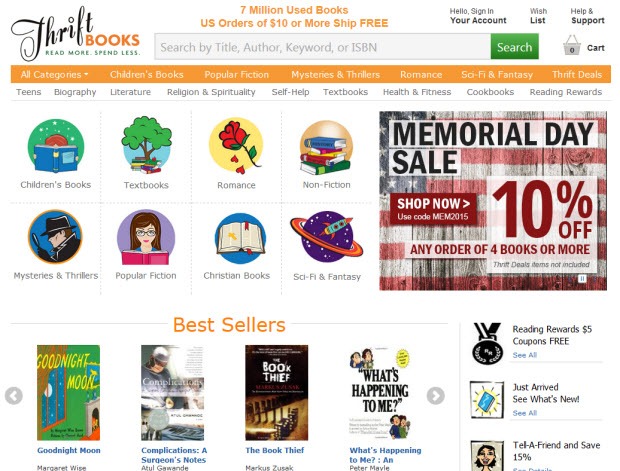 True to its name, Thrift Books offers books at very competitive prices. You can grab most books for $4 or less. There are also book deals where you get two books for $7, three books for $10, four books for $12 and additional books are only $3 each.

Shipping is 99 cents per item within US for orders below $10, and free above. Shipping to Canada and UK is $2.99 per item, and for the rest of the world, it’s $4.99 per item. Expedited shipping rates are higher – $9.99 for international deliveries, but still cheaper than most booksellers.

AwesomeBooks doesn’t have the most exhaustive catalogue but they offer one of the best shipping rates. They charge a flat $4.63 for every order of any size, consisting of as many books as you want. UK deliveries are free. Books are usually priced between $3-$4.

Aside from books, AwesomeBooks also sales music CDs, movie DVDs and console games as well as PC games, all of which are priced at a flat $3.33 per CD or DVD. 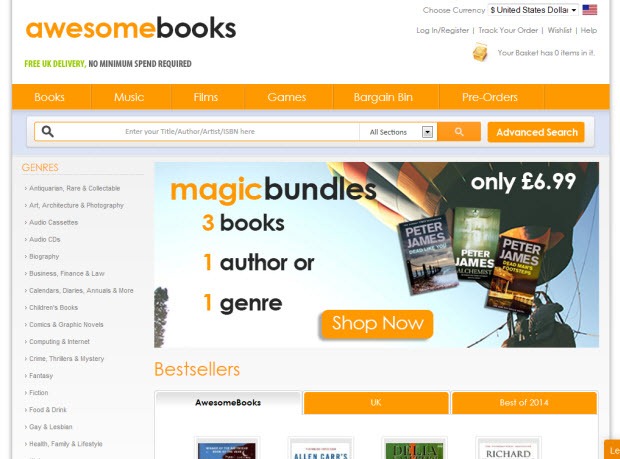 World of Books is another UK-based bookstore that offers used books at competitive prices. Their catalogue is not large but they do have a decent collection including really vintage material. Most of their books are priced between £3 and £3.49 (about $4 – $5.4). Shipping within UK is free, and for the rest of the world it’s £2.00 per book or just $3. 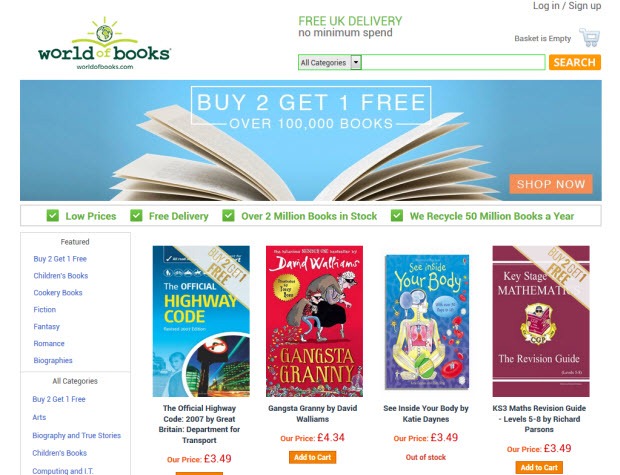 AbeBooks is an online marketplace for books where you can search across the inventory of thousands of independent booksellers from more than 50 countries. All the above mentioned bookstores also have their presence on AbeBooks, but it’s better to buy from them directly as their rates may vary on the AbeBooks marketplace. For instance, Better World Books charges $5 for shipping for books sold through AbeBooks, even though they offer free shipping on their own website. But for other small booksellers that don’t have their own shop, AbeBooks is the perfect place to find them. 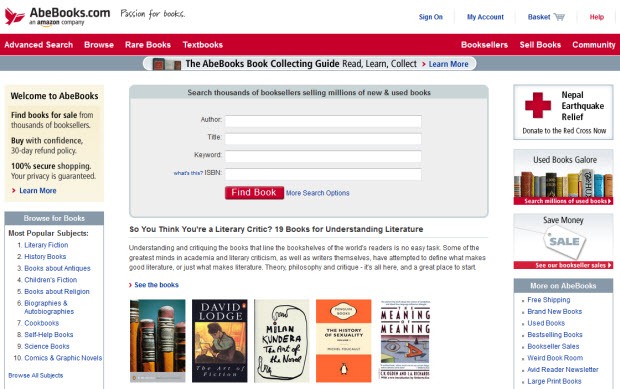 Needless to say, AbeBooks has a staggering collection with titles ranging from the extremely common, where there might be hundreds of copies listed priced at pennies, to truly unique manuscript material worth thousands of dollars. In addition to books, magazines, audio books, journals, illustration art, vintage photographs and paper ephemera are offered.

Shipping rates vary from bookseller to bookseller. It starts from a minimum of $5 for international addresses and can go all the way to $17-$18 or more. Some booksellers offer free shipping within the US and UK, or charge a nominal rate.

AbeBooks is run by Amazon.

This Article Has 15 Comments