You can love it or hate it, but you cannot ignore it. From web applications and banners to games and full length feature films, Adobe Flash is used everywhere. We see it everyday on the web, on YouTube videos, on advertisements, on web games. The applicability, flexibility and extensibility of Adobe Flash is indeed phenomenal. No wonder, it comes with a hefty price tag.

But is there any free alternative to Adobe Flash? Strictly speaking, the answer is no. But there is one software that can be called a replacement of Flash. It’s called LiveSwif. LiveSwif is a freeware animation program that has the same interface like Macromedia Flash 5 and supports vector drawing and key frame animation. But LiveSwif wasn’t a freeware when it was launched in 2004 by the LiveSwif Team. It was intended to be a low cost ($40) alternative to Macromedia Flash (Flash was owned by Macromedia before Adobe bought it), but due to some unknown reasons the company hit the dust and disappeared leaving behind LiveSwif on the web as freeware! 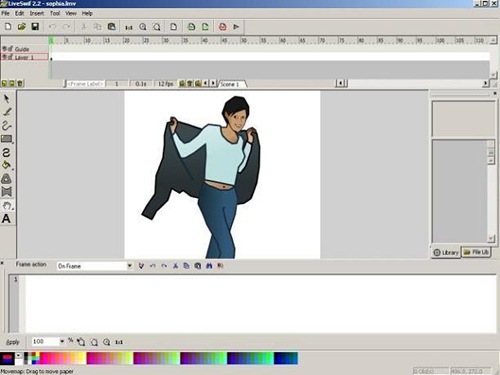 The LiveSwif drawing and editing toolset is very basic compared to Adobe Flash, but hey, this software hasn’t been improved since 2004 so you have to bear with that. LiveSwif’s drawing toolset contains the usual stuff like Line tool, Magnify Tool, Shapes tool, Fill Tool etc.

LiveSwif is still alive due to a small community of users who call themselves Liveswifers, who is there to help other LiveSwif users. The Liveswifer community is  planning to develop a successor to LiveSwif from scratch called OpenSwif, which is going to be the first true open source alternative to Adobe Flash, although development has not started as yet.