There is an abundance of commercial applications available on the market for the purpose of 2D animation – Adobe Flash, DigiCel FlipBook, Toon Boom, Anime Studio etc. The free programs hardly make a dent on the 2D animation industry because of their limited capabilities. However there is one freeware program that is genuinely capable of producing decent quality full length 2D animation movie.

The application I’m referring to is Synfig, a free and open source 2D vector graphics based animation program. Synfig was originally the custom animation platform for the “Voria Animation Studios”, but when the studio closed down the owner and primary developer Robert Quattlebaum released the software under the open source GNU GPL in early 2006. Since then Synfig is under active development; the latest version came out on October 2008. 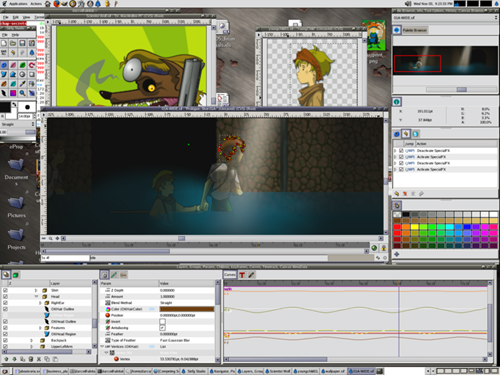 Synfig has an impressive list of features. It’s capable of simulating soft-shading using curved gradients within an area so that the animator doesn’t have to draw shading into every single frame. It also features spatial and temporal resolution independence, high dynamic range images, and a flexible plugin system. There is also a wide variety of other real-time effects that can be applied to layers or groups of layers like blurs, color tweaks, distortions, gradients etc. Other features include the ability to control and animate the width of lines at their individual control points, and the ability to link any related data from one object to another. Synfig also offers an alternative to manual tweening eliminating the need to hand-draw each frame.

You will find more in their gallery

Like any animation software, Synfig does have moderate learning curve that you have to follow before you can master this tool. Don’t be disheartened because it has a huge resource of documentation, tutorials and an active community to help you get going.