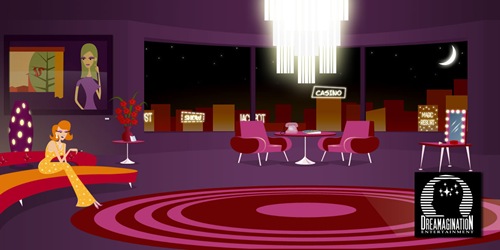 Dirty Split places you in the shoes of a private investigator, Alan Baxter, who has to solve a murder. Dr Christopher Bedford, a highly successful plastic surgeon has been murdered and the accused, Mr Walter Vanderbuilt, a privileged man from a wealthy family, has been arrested. But Mr Vanderbuilt’s mom is convinced her son is innocent. You, Mr Alan Baxter, must investigate the case and find the real killer and prove Walter’s innocence

Mr Baxter’s search for the truth leads him on a bizarre journey, through Los Angeles, Las Vegas and New York uncovering many secrets about the good doctor, until he reaches it’s final, twisted conclusion.

The game’s graphics are in 1960’s styled cartoon with pleasant colors and superb voice acting. The game’s sound effects has been done equally well. You can hear things like Alan’s footsteps as he walks, birds twittering in the air, doors opening or closing, and even the sound off airplanes flying past at the airport.

Dirty Split is a stunning free game. The only downside is it’s length, it’s too short. Dirty Split is available in English, Dutch, Spanish, French and Czech.