Using the Spacebar to control the engine bursts and the arrow keys to rotate the Lander, you have to manipulate the spacecraft’s forward as well as vertical velocity to make a safe landing. To add realism, the game uses real audio from the actual Apollo 11 mission. Also your fuel is limited, just the way it happened 40 years ago. The following video demo demonstrates a successful landing.

I’m not sure how this person did it… it’s hard as hell! Forget about landing on the bull’s eye, I’m struggling to make any kind of landing at all, without crashing into the surface. After a dozen tries, here is my best score. 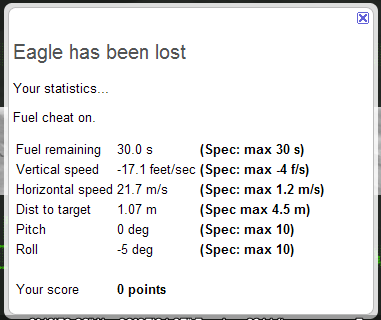