Notebook Hardware Control (NHC) is an advanced hardware monitoring and controlling application developed particularly for notebooks or laptops, that allows you to control it’s different hardware components. NHC is an integration of a large number of pretty powerful control application ranging from simple system monitoring to tools for CPU voltage control.

Notebook Hardware Control could have been easily broken down into several separate applications because of the vast range of functions it performs. Good, they didn’t. Now you have just one powerful, multi purpose application to install.

The main screen of the program gives you a concise report of your notebook’s performance and status of different hardware components. Information regarding CPU clock, CPU load, CPU temperature, battery life, hard disk temperature etc can be here. 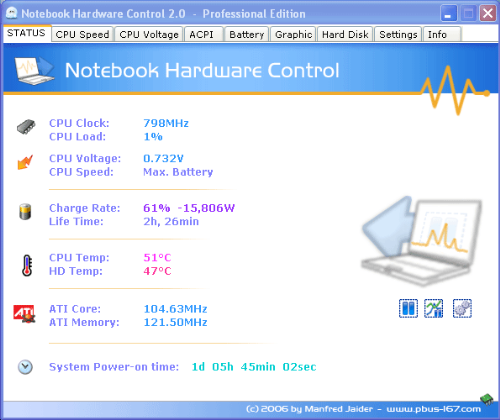 When you start the application the first time, you won’t see all the different tabs as shown in the screenshot above. You have to turn on NHC monitoring by clicking on the green “play” like button. Once NHC monitoring is turned ON the various control modules become accessible. The system monitoring data along with graphs can also be embedded into the desktop by turning on this feature. It looks pretty cool too.

The following is a “brief” list of functions you will find in Notebook Hardware Control.

– Change the speed of your processor and change the Windows Power Scheme. You can run the CPU at maximum speed for maximum performance, at optimized speeds for longer battery life, or throttle the speed even further for maximum battery life. These different power schemes can be switched from one to the other dynamically without computer restarts. The schemes are also easily available from the tray icon’s menu. 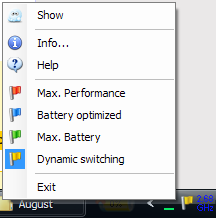 – NHC also allows you to change the default CPU Voltages to reduce heat dissipation, power consumption and prolong the battery lifetime. A CPU stability check is included to test if the CPU is stable on the selected voltages.

– There is an ACPI Control System with which you can visualize and control such hardware components like LCD brightness, switch ON/OFF wireless LAN, control notebook temperature and fan speed etc.

– NHC has a battery indicator that displays available battery information like battery status, charge rate, remaining life time and capacity, wear level and so on. These information are available in the indicator embedded on the taskbar.

– Using NHC you can also control the notebook’s graphics card’s performance and other settings.

– The Hard Disk section carries various tools for controlling the hard disk. You can change the hard drive’s standby time, tweak it’s Power Management and Acoustic Management features. To avoid overheating you can set the HD temperature on which the notebook should reduce the CPU clock or shut down the computer. It also monitored various S.M.A.R.T settings of the hard disk drive.

Notebook Hardware Control Personal Edition is an amazing piece of software. The personal edition is free, but it also has a Pro edition. The Pro edition includes some additional features and supports profiles. Different settings can be saved with different name under different profiles, allowing you to quickly switch from one configuration to another. The profile editor is only available in the paid version.