Remember Nimi Visuals? We covered this neat little Windows visual effects and customization tool some time back when version 10.1 was released. The last edition of the program came with hundreds of nifty tricks and effects from transparent borders, jelly windows, snow effects, taskbar blurring and so on. If you thought those were enough, checkout the newly released version 10.2 which comes with even more bells and whistles as well as numerous new features and improvements.

In addition to all previous effects, the following new effects can be seen in version 10.2. 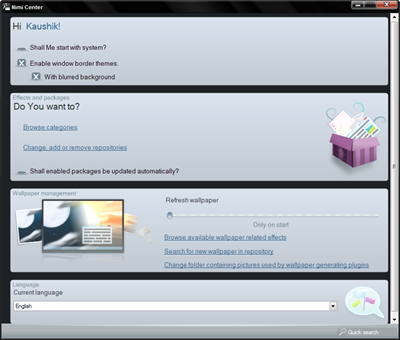 Nimi Visuals 10.2 runs on a new component architecture that offers better system integration. Many effects like jelly windows, edge warp/snap or maximize, showcase, toss, taskbar blur etc can now be accelerated by the GPU if present. In previous releases of Nimi Visuals, all graphics were entirely software based.

The new Nimi Visuals can also analyse almost any given web address for repositories capable media like wallpapers, system themes or 3rd part software, and automatically add it to available packages list. Moreover, it automatically adapt to ZIP archive content if provided.

A new wallpaper management feature allows users to set how often wallpaper will be generated with chosen effects and set up picture folder directory.

Moreover, the program now automatically detects your language and translates it’s interface to the local language. Even when performing quick search, the program translates your search keywords on the fly matching them with the package description.

As usual, the program itself is little more than 1 MB. The memory footprint when in use can however be several tens of megabytes depending on how many effects are turned on.