If Wikipedia is to be believed, millions of meteors hit the Earth’s atmosphere every day. That’s impressive. However only a small percentage of these are visible because half of them happen during the day, and many are too small to be seen. The rest are obscured by air pollution and light pollution. Meteors are hard to catch because of the complete lack of predictably when the next one is going to strike and strike bright enough to be visible with the naked eye.

The best time to watch meteors is during meteor showers when flocks of them slash through the Earth’s atmosphere together. But how do we know when the next shower is going to happen? Keeping an eye on the news helps, but not all showers have a celebrity status as that of the Leonid or the Perseid. 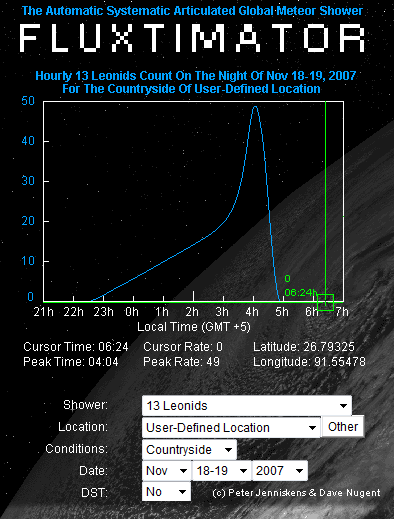 NASA has created a handy Java applet called Fluxtimator that allows you to calculate the expected shower rate for a given date and a given location. It also allows you to see the difference between staying downtown or moving out into the country side to a dark and clear location. All rates were calculated by taking into account the Moon light, but assume a transparent cloud-less sky and unobstructed field of view.

Dozens of meteor showers are available on a dropdown menu, many of which I’ve never heard before. The only thing this application is missing is it doesn’t tell you when the next meteor shower is going to occur. It only tells you whether a particular shower is visible on a particular night. So I guess, you will have to gather that information from somewhere else.

I admit this article would have been more useful had I published it about 12 hours earlier. The Leonid meteor shower peaked last night, if you live in the west. But if you’re located on the east like in India you can still catch an intense shower tonight.

Also read, how to view the International Space Station