LightShot is screen capture tool for Windows that works very much like the Snipping tool in Windows Vista and 7, with the added advantage of automatically uploading it online for sharing or editing.

LightShot replaces the default PrtScr key of the keyboard to launch the shooting tool. This is similar to the Snipping tool of Windows as already mentioned. Click and drag the mouse cursor to select the region you want to take a screenshot of. The dimension of the selected region is displayed at the top of the selection, which is very helpful for bloggers who require screenshots to be within a specific dimension. This reminds me of Greenshot, which had this same feature. 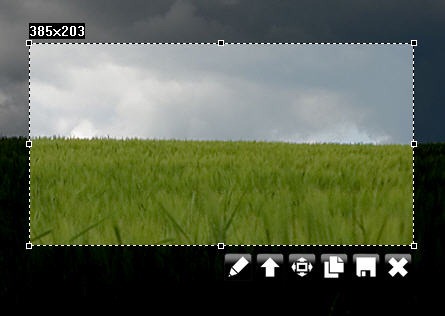 Once the region is selected an array of buttons appear at the bottom which gives access to various options like copy to keyboard, save as an image file to hard disk, upload to Imageshacks and edit online on Pixlr.

LightShot also supports a handful of shortcuts. The best thing is the program uses the same default shortcut Windows uses for such operation like Ctrl+C to copy, Ctrl+S to save and so on.

LightShot is very basic and I don’t suppose it can be compared with other screen capture programs with inbuilt image editors and all kinds of advanced screen capturing options. It does support online image editing, but I prefer a desktop image editor. But LightShot is a very good replacement for the Snipping Tool – works exactly the same along with a bunch of added features.

Update: The software does some sneaky things to your computer that you might not like. Details here