Format Factory is a free program for Windows that lets you to perform a number of operations on multimedia files. Format Factory primarily handles format conversion and it support a number of audio, video and picture file formats. It’s also capable of ripping DVDs, and audio CDs, creating ISO files and joining multiple video and audio files into one. 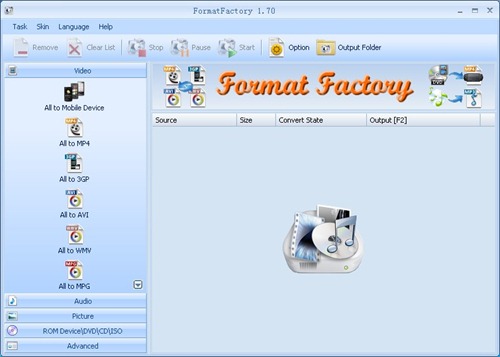 Format Factory can convert media files to the following format:

As you can see the file converter is definitely weaker in the video department in comparison to some other file converters (Oxelon Media Converter, MediaCoder, Free Studio Manager, SUPER). You cannot convert a video to MKV or DIVX for instance. For Audio and Image conversion, pretty much all are supported.

The DVD Ripper is not bad. It lets you rip DVD to a number of different formats including various mobile device compatible ones. You can adjust bitrates, video size, add subtitle, watermark, de-interlace etc. The audio CD ripper is basic but enough for home use.

Format Factory can also create ISO and CSO images of DVDs and CDs and convert one image format to another.

Other tools include a video and audio joiner which is quite functional, and a video muxer.

Format Factory isn’t original nor it’s a particularly impressive program, but it does give users a choice. Try it, you may like it.