When it comes to extremely small Linux distribution, it’s hard to beat Tiny Core Linux. At an image size of 10 MB, it’s one of the smallest distribution with a graphical user interface (although operating system smaller than that exist).

Tiny Core Linux is based on BusyBox, FLTK and other minimalist software. The core runs entirely in RAM and boots very quickly. The minimum amount of memory required for TCL to run is a mere 48 MB. TCL developers also offer a Micro Core version at just 6 MB image size, but that one is console based. 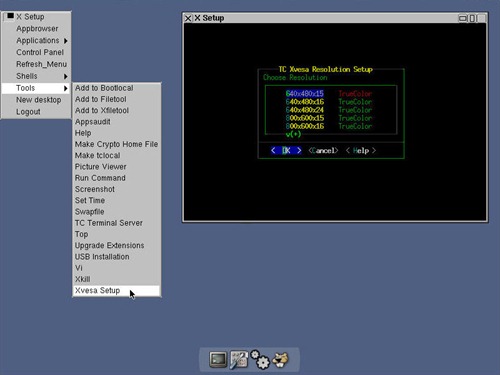 Tiny Core Linux is not exactly a complete desktop OS nor does it support all hardware completely. It represents only the core needed to boot into a very minimal X desktop typically with wired internet access. The user has complete control over which applications and/or additional hardware to have supported, be it for a desktop, a netbook, an appliance, or server, selectable by the user by installing additional applications from online repositories, or easily compiling most anything you desire using tools provided.

Tiny Core Linux can be run as a Live CD from an optical disk or pen drive. It can also be installed to the hard disk like any regular OS.