Remember that $35 tablet PC Indian HRD minister announced last month? It was received with skepticism and many people wrote it off as pure vaporware, which was predictable given the price. Now popular Indian gadget show called Gadget Guru just featured an exclusive hands-on review of the device that you can catch in full below. 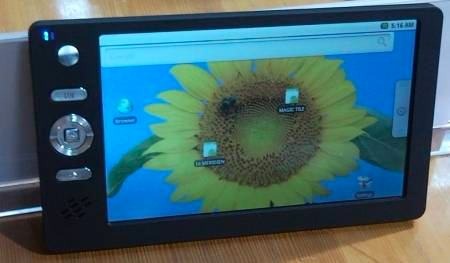 "Everybody actually said, ‘It cannot happen, a $35 tablet,’ and not only does it exist, it works and it works brilliantly," said Rajiv Makhni, co-host of the show "Gadget Guru," who took the computer through its paces with show cohort Vikram Chandra and then talked all aspects of the gadget with Kapil Sibal, the country’s Minister for Human Resource Development and the same guy who officially unveiled the super-cheap touch-screen device. Aimed at the country’s students, it’s being called India’s answer to Nicholas Negroponte’s famed OLPC laptop.

The device prototype is seen to run on Android, has a virtual keyboard, camera, full video capability, Wi-Fi, an e-reader, and 2GB RAM. The touch screen is a bit sluggish, according to the reviewers, but all in all, they call it a "fairly impressive little package,".

The $35 price tag will only be for students in Universities, with no plans yet for retail sale though. The price will be higher when it is finally available for the public, the HRD minister acknowledged, but defiantly cheaper than similar devices available on the market today. The device is expected to be available by mid-2011.

Checkout the video. You might want to skip to 2 minute 33 seconds to get to the actual content.