Microsoft Mathematics Add-in for Word and OneNote is a set of tools that you can use to perform mathematical operations on expressions or equations in your Word documents and OneNote notebooks. The Mathematics add-in, which works with Microsoft Word 2010, Microsoft Office Word 2007, and Microsoft OneNote 2010, makes it easy to plot graphs in 2D and 3D, calculate numerical results, solve equations or inequalities, and simplify algebraic expressions. 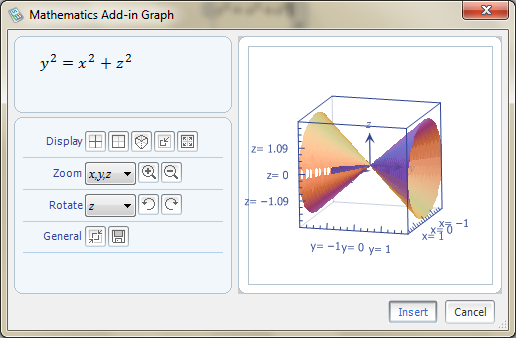 The add-in uses dynamic 3D graphs and charts to help educators illustrate complex math problems and concepts. From algebra and pre-calculus to physics and statistics, teachers and students can unravel equations and visualize formulas through 2-D and 3-D graphs. It can plot functions, calculate numerical results, and dynamically solve for "x".

The Microsoft Mathematics Add-in, can be used to perform the following tasks: