Emails can be tracked the same way visitor tracking is done on websites – a small piece of code, usually in the form of an image, is embedded into the body of the mail. When the email is opened, the image code sends a request to the tracking server to get the image, and this action lets the sender know that the email has been opened.

Tracking email messages is nothing new. Several such services exit, one of which was reviewed previously on Instant Fundas. EmailOracle is a new service that monitors emails and can also remind you when the recipient haven’t replied to you, or even seen the email yet. But what makes EmailOracle unique is the integration with your Gmail’s interface. 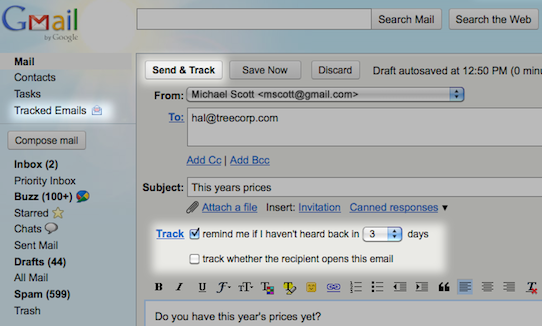 EmailOracle is available as a browser plugin for Chrome, Firefox and Safari. After installing the plug-in and authorizing it to access your Gmail or Google Apps account, you’ll get some new buttons and options on your Gmail dashboard.

When composing a message you can choose to track when and how many times the recipient has opened your message, and set a reminder to yourself if a reply isn’t received within a set number of days. This is actually a bit creepy.

Fortunately, free plan users will get all tracked email messages branded with an image labeled "Email tracked by EmailOracle". This will at least tell the recipient that the message is bugged. Paid users, however, can embed a 1px X 1px image which is essentially invisible. The recipient will have no idea that the message is been tracked and lies such as “Oh! I haven’t read your mail” will not hold.

The only way to avoid getting tracked is to disable image viewing.

Free plans are limited to 20 tracks per month.