This week a new dating site called Lovely-Faces.com was launched with 250,000 member profiles the very first day of launch? How? Simple – they scrapped the data from Facebook without the user’s permission, of course. But be not alarmed, for this is only a prank site created to prove a point – the dangers of entrusting one’s personal data to a website and how vulnerable our virtual identities are in the age of social media. 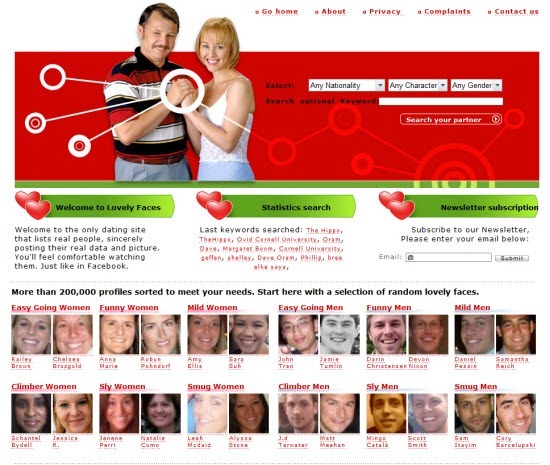 The people behind Lovely-Faces.com are media artist Paulo Cirio and media critic Alessandro Ludovic. The duo spent months downloading public information from one million Facebook profiles, creating a database of hundreds of thousands of profile pictures where they were “intoxicated by the endless smiles, gazes and often leering expressions.” The profile photos were then sorted into specific social categories (inferred by analyzing facial expressions) and uploaded to the dating website. Those smiling faces are blissfully unaware that they had signed up for Lovely Faces’ services, or that they were considered "easy going women" or "sly men"

Facebook, an endlessly cool place for so many people, becomes at the same time a goldmine for identity theft and dating — unfortunately, without the user’s control. But that’s the very nature of Facebook and social media in general. If we start to play with the concepts of identity theft and dating, we should be able to unveil how fragile a virtual identity given to a proprietary platform can be.

Once users accepted to be in Facebook and so putting all their trust in it, they should give for granted that their personal data could be used by everyone for other purposes. We are artists, and we do provoking artworks, Facebook data is used by much worse entity than us, I would like to ask to people if they feel comfortable with this.

Scraping people’s information violates our terms. We have taken, and will continue to take, aggressive legal action against organizations that violate these terms. We’re investigating this site and will take appropriate action.

It’s worthwhile to note that Mark Zuckerberg, Facebook’s founder, himself scrapped the names and photos of fellow classmates off school servers at Harvard in 2003 and created a website called FaceMash – the site that sowed the seeds of Facebook.