Recently, Gawker Media and all the blogs under their wing underwent a full-blown redesign that has been attracting a lot of criticism from readers. Even traffic seems to have taken a major hit. Despite all the criticisms and the flaws in the design, Sahas Katta of Skatter Tech has built a WordPress theme clone of the Gawker’s new design for anyone who wishes to implement it in their blogs. 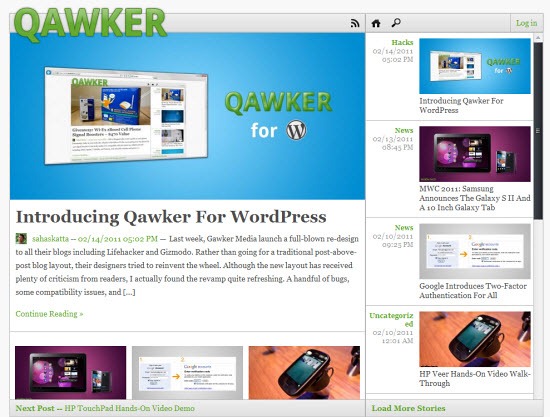 “I was a little bored and had some free time on my hand this weekend, so I decided to code an equivalent theme for WordPress users. Within about six hours and a few breaks, I had a nearly perfect replica without having to look at a line of their code,” he says. “Like the original, my template features a two-pane interface with a full article on the left and a list of scrollable recent posts on the right. With a little jQuery magic, I managed to even get all the instant loading features working without having to force users to refresh pages. I also threw in support for comments and search.”

The theme works on the latest versions of Chrome, Firefox, Internet Explorer, Opera, and Safari. But there could be bugs lurking around, he warns.

The WordPress theme named Qawker is open and free and can be downloaded from this page. Check out the live preview here.