Most modern operating system, except Windows, has a built-in package manager that handles software downloads and installation. Ubuntu has Synaptic, OSX as the App Store, but Microsoft never tried to integrate a package manager with Windows. Several independent developers tried to do that with varying level of success. FreeApp , ZeuAPP, FreewareUpdater and Windows Package Manager are some of these programs that we have seen in the past. Npacked is a new one.

The basic premise is the same – the program fetches a list of software from a repository it maintains on their server – Google Code Hosting, in this case – and populates it in the program window. The user then selects which software or application they wish to download and install, and clicks on the Update button. At this point Npacked takes over. 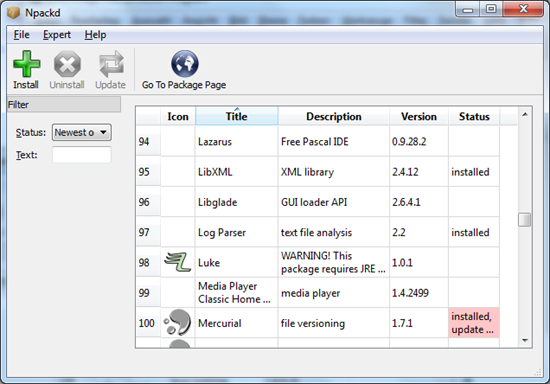 The process of installing and uninstalling applications is completely automated. Npacked can even do silent or unattended installation, something which we talked about the other day.

Npacked supports over 200 applications; the usual free and open source programs. The list is definitely not complete, and you shouldn’t expect it to be, but enough for the average user.