Firefox 4 no longer displays the Menu Bar by default. Instead, there is an “App Menu Button” at the top with Firefox written across it, clicking on which reveals a menu that gives you access to different tools and areas on Firefox. There is the Add-on manager, Bookmarks and History as before. The contents of the View menu is changed and now called Options, and Web Developer tools made prominent. But where is the all important Tools menu?

There is no Tools menu in Firefox 4, which prevents you from accessing features added to the browser by add-ons, the Session Manager menu and Greasemonkey menu for instance, and the Geolocator menu I wrote about earlier today. 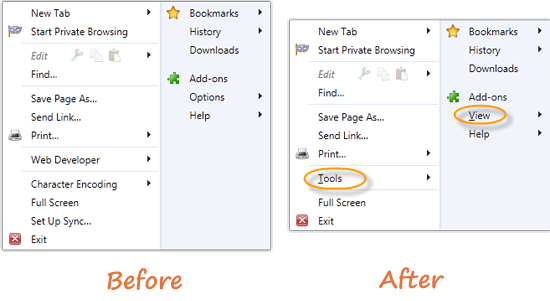 New Old Menu is an extension for Firefox 4 that fixes the new Firefox menu by bringing back the Tools menu and the View menu. It also removes the Web Developer menu and Character Encoding Menu and moves it back to where it originally belonged.

Under the View menu you can access the Sidebar, Zoom and Page Style which were unavailable on the new menu. The Tools menu bring all the add-on specific menus, error console, clear history option and the Options menu.