The latest version of the Microsoft Image Composite Editor (ICE) comes with an exciting new feature that enables users to put together panoramic images not only from a collection of photographs, but also from video. Instead of snapping multiple pictures, you can now record a video and then let Microsoft ICE generate a panoramic image by stitching together frames from the video.

The new video panorama feature in Microsoft ICE is akin to the “sweep panorama” function found in newer digital cameras. If you have bought a digital camera within the last year or two, your camera is likely to have the “sweep panorama” function. You set the camera to this mode, click the shutter control button and sweep the camera in a horizontal arc. The camera records what you shoot and automatically creates a panoramic image.

In this video the photographer was panning the camera to follow the motion of the snowboarder.  I used ICE to indicate “Start” and “End” points, and I gave a few hints about which video frames were interesting. The motion tracking and final composition was then done automatically by ICE.

Creating video panorama is pretty straightforward. You load a video by selecting “New Video Panorama” from the File menu, then draw a regions of interest on individual video frames to ensure that certain elements are present in the final composition You can also select the start and end frames. Microsoft ICE supports most common video formats (avi, mov, wmv, and more), and the results can be uploaded directly to Photosynth. 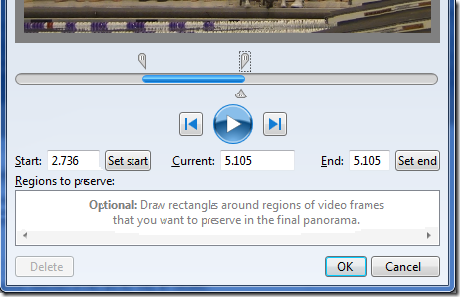 Curiously, the video panorama feature is only available for ICE running on Windows 7. For other versions of Windows this menu item appears disabled.

In addition to this new feature, Microsoft ICE now boasts of automatic vignette correction. Lens vignetting is the effect of the center of a photograph being brighter than the periphery. This effect can be especially apparent when stitching photos. In this ICE update, lens vignetting is automatically detected and removed. 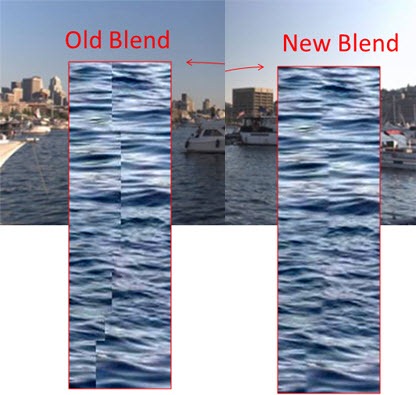 The new Microsoft ICE also does a better job at stitching. Previous versions did blending by applying a color adjustment to the panorama source images such that there would be minimal visible differences between them. The new version of ICE intelligently fades between the images.

In addition to the above main features, Microsoft ICE carries a number of other improvements: