Mozilla recently moved Firefox to a rapid release cycle to bring new features and security, stability, and other bug fixes to users much faster than previously. This means that users will be able to see at least one major version of the browser in one of the four development branches every 6 weeks. But this also means that add-ons could break more frequently. To deal with the issue, Mozilla has proposed a new plan.

With past Firefox releases, add-ons were marked as incompatible with a new version until the developer manually tested and updated their add-on to support it. This process took months to get compatibility to an acceptable level and resulted in many add-ons marked as incompatible even though they actually were. 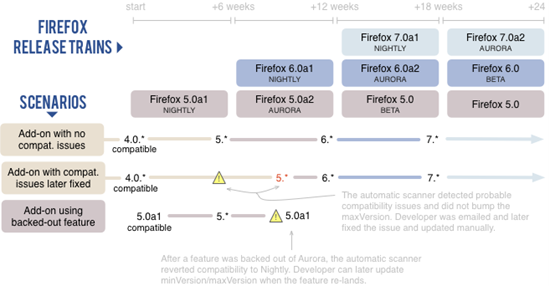 The day before a Firefox release is branched to Aurora, Mozilla will run a compatibility scanner on the latest versions of all add-ons compatible with the most recent release. Any add-ons flagged as potentially incompatible or that use binary components will not have their compatibility bumped and the authors will receive an email with the identified problems. After testing and fixing any problems, the author can then manually set compatibility and rejoin the automatic process for future releases. Add-ons that have not been flagged will have their compatibility bumped to the new version.

Add-on developers who host their add-ons on their own site can run compatibility tests on their own without being hosted on Mozilla’s website using the standalone validator tool.

End users can follow this guide to selectively update old extensions or make them work with a new Firefox build.