Firefox’s core strength has been its extensions that allows the browser to adapt itself to the different needs of different users. But extensions also are the primary cause of most of Firefox problems, from memory leaks to security attacks to slow startups. To address these concerns Mozilla has decided to crack down on add-ons that adds precious seconds (or milliseconds) to Firefox start-up time.

Almost all extensions has a negative impact on the performance of the browser – just the mileage vary from extension to extension. According to Mozilla,

On average, each add-on you install adds about 10% to Firefox start-up time. For some users that’s mere milliseconds, and for others it may be half a second; it all depends on the hardware and software of each individual. Many add-ons add less than 10%, and unfortunately, there are quite a few add-ons that add more. But based on our real-world performance data, installing 10 add-ons will double Firefox’s start-up time.

Within the next two weeks, Mozilla will begin displaying warnings for any add-on that slows Firefox start-up time by 25% or more. In the upcoming version of Firefox, these warnings will also be displayed in the Add-ons Manager. 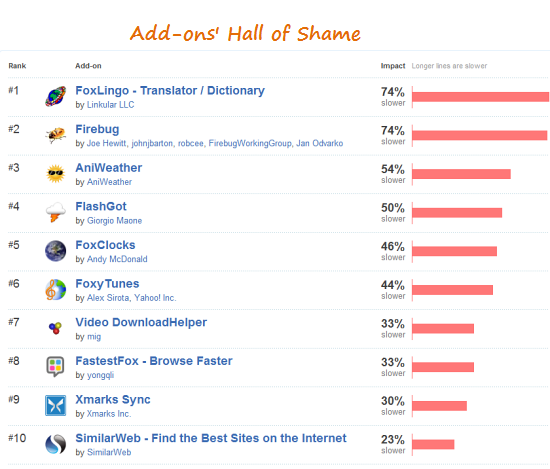 Every week, Mozilla will run automated performance tests on the top 100 add-ons hosted in their gallery, and display the results on this page. One of the most popular Firefox add-on, Firebug, slows Firefox start up by 74%. Checkout the list and find out if you use any of the add-ons featured on it. If you do, try to find an alternative that has a lesser impact on the browser.

Mozilla says that soon they will automatically scan new versions of all add-ons as they are submitted, and in the coming months, they will expand this to include other measures, such as page load time. In future versions, Mozilla will also restrict the installation of third party add-ons unless the user explicitly allows it, to prevent developers from sneakily installing toolbars.