The Matroska Multimedia Container (MKV) is an open standard free container format that can hold an unlimited number of video, audio, picture or subtitle tracks in one file. Matroska is similar in concept to other containers like AVI, MP4 or ASF but is entirely open in specification, with implementations consisting mostly of open source software. In many ways, Matroska is better than AVI as it supports virtually any video and audio format and has limited support for DVD menus. In comparison, AVI has no support for menus and is problematic towards certain video formats like H.264/AVC.

If you want to save your video DVDs on your computer, it’s a good idea to rip them to MKV. You can use such universal ripping tools like Handbrake to do that, and also retain subtitles and chapters in the process, or use specialized ripping programs like MakeMKV which is one of the fastest DVD and Blu-Ray program I have ever come across.

Say, you ripped a DVD to MKV but forgot to add chapters, or you have some MKV files on your hard disk that doesn’t have chapters, it’s possible to add chapters later. There are a few programs for chapter-ising MKV files, and the one that I found very simple and effective is MKV Chapterizer.

MKV Chapterizer allows you to add chapters with ease and speed. The only thing you need to do is drop your MKV file onto the program, choose how often you want a chapter to be created and then press Chapterize. Depending on the size of the video file the entire operation takes from a few seconds to a couple of minutes. And curiously, the output files are always a few kilobytes smaller than the original ones. 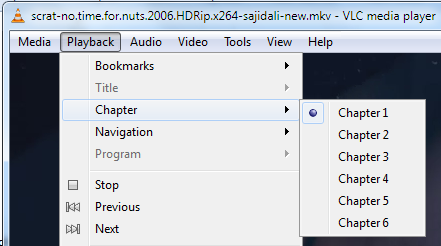