Google’s new social networking site Google+ has taken over the internet like a storm. The initial impressions have been very positive and many Facebook users have already migrated to Google Plus. But make no mistake, Facebook is here to stay, which means we now have two social networking profiles to maintain. Two browser tabs for two social networks? Nope, that’s not how we do things.

The developers of cross-browser extensions developing framework Crossrider has built an extension for Chrome and Firefox that combines both social networks into one. Once installed, the extension will add a Facebook icon on top of your Google Plus page which gives you access to your Facebook stream from within Google+. You can post update, read comments, add replies, and Like them. So now, Google Plus is your primary network, but you can still use Facebook without logging into it through another window. 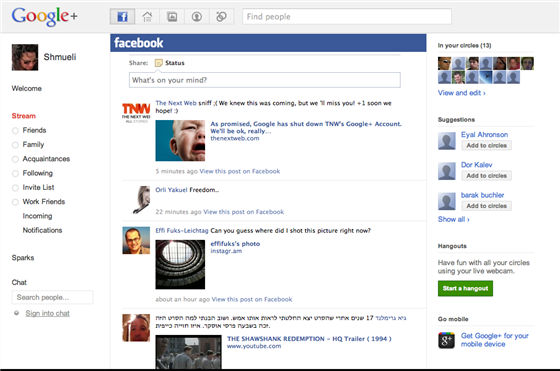 This is clever but not ground breaking to be honest. Facebook’s flexible API allows the social network to be embedded in just about anything. Previously, we demonstrated how you can access Facebook from your Gmail inbox. Then there are Chrome extensions that lets you access your Facebook stream from the browser’s toolbar.

The Google+Facebook extension currently support Chrome and Firefox only.