The ISOstick is a USB flash drive that tricks the computer into thinking that it’s a physical optical drive. Of course, you can’t pop in your DVDs into the ISOstick, but any ISO image file that you copy into the drive will be automatically mounted as optical drives, thereby allowing you to boot your computer directly from ISO files. ISOstick is exactly the device for those with loads of Linux distributions and no optical drive.

The ISOstick is basically a microSD card mounted on a flash drive enclosure. It carries a software that mounts the disk images, and a custom bootloader called "isosel" that helps you select which OS to launch if you have multiple ISO images on the drive. There is a hardware read-only switch that helps protect the Flash drive from contracting viruses and malware from the host computer. There is also a bright LED to show drive activity, the brightness of which is completely configurable. You can even turn it off if you wish. 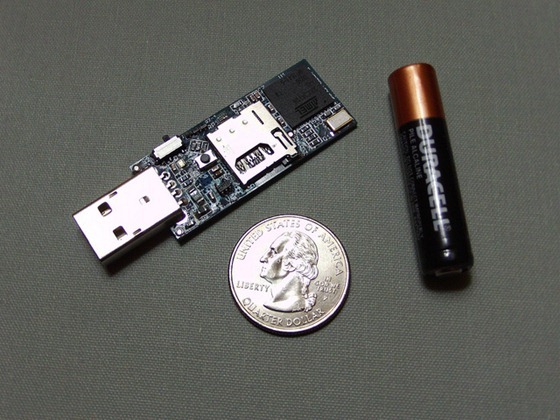 Currently ISOstick supports only FAT32 file system and ISO files, but these restrictions are expected to be removed in future firmware updates. The team behind ISOstick are working on to support image files other than ISO (like BIN, CUE, NRG) as well as other filesystems such as HFS+, ext2/3/4, and NTFS.

The catch is – ISOstick is a crowdsourced funded Kickstarter project, that has not yet gone into production, but they have already raised more than $55,000 – twice their intended goal of $25,000 and 7 days before the deadline. So it might actually hit the streets, but when it does, it won’t be cheap – it will cost around $100 for an 8GB stick, $175 for a 16GB stick, and $225 for the 32GB drive.

I also have a few misgivings, particularly after seeing the production pictures on Flickr. ISOstick looks like a homegrown project. No, it is a homegrown project, which makes me skeptical about build quality, workmanship and longevity. “The soldering is utter crap on this because it was done by hand, save the microSD socket, BGA, and the two capacitors between them,” reads the description on one of the images. The fact that the drives come with a warranty of only 30 days, leaves little room for doubts.