Zorin OS is an Ubuntu-based Linux distribution designed especially for newcomers to Linux. The graphical user interface resembles a Windows 7 desktop that dramatically reduces the learning curve while still allowing users to experience the main advantages of Linux.

Zorin OS has program called Zorin Look Changer which lets you change the appearance of your desktop to make it look and act like either Windows 7, Windows XP or Linux in the free versions of Zorin OS. The Premium versions also include other appearances like the Windows Vista, 2000 and Mac OS X. 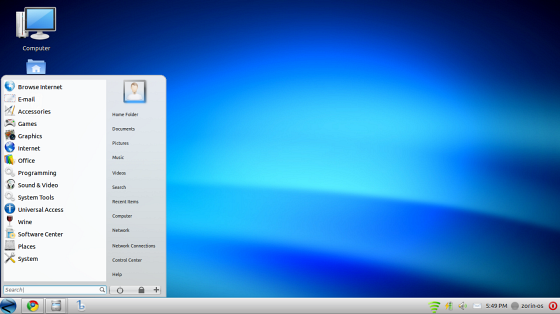 The distribution comes loaded with many programs that offers excellent out-of-the-box experience such as MP3 and DVD playability through media codecs, VLC media player and Google Chrome browser. It has LibreOffice, OpenShot video editor, GIMP, social networking programs and others. The full list of included packages can be viewed here. Zorin OS supports a large library of devices such as printers, scanners, cameras, keyboards. These devices will work as soon as you plug them in without the need for installing additional drivers.

Zorin OS also comes with PlayOnLinux – a graphical front-end for the Wine software compatibility layer – that enables you to install many Windows programs on Zorin OS.

Zorin OS 5 is the latest release, and comes in a number of flavors including Zorin OS Core, Lite and Educational, which are free and Zorin OS Gaming, Business, Multimedia and Ultimate, which can be bought at the Zorin OS store for 7 to 10 euros. Linux
Looking to try out a new flavor of Linux? Distrowatch.com has information and daily news about tons of Linux distributions,…

Linux
Although I don’t write about Linux much, this is a news that is worth reporting – the game distribution platform/software…

Android
Linux on Android is an ongoing project that attempts to port the Linux operating system to Android. It consist of…

Android
Canonical today announced Ubuntu for Android, a unique version of Ubuntu that is designed to seamlessly integrate Android with the…