All Windows 8 visual styles for Windows 7 that has been released till date are based on either leaked builds of Windows 8 or or screenshots published in blogs and media (see: 8 skin pack and Windows 8 UX Transformation Pack). The Windows 8 Developer Build is the most recent build that is legally available to the public and although still a work in progress, it is closer to what the real user interface will look like when the operating system debuts next year.

Most of the work done on Windows 8’s interface is on Metro. The traditional desktop interface received some minor changes, particularly the window, the taskbar and some touches here and there. 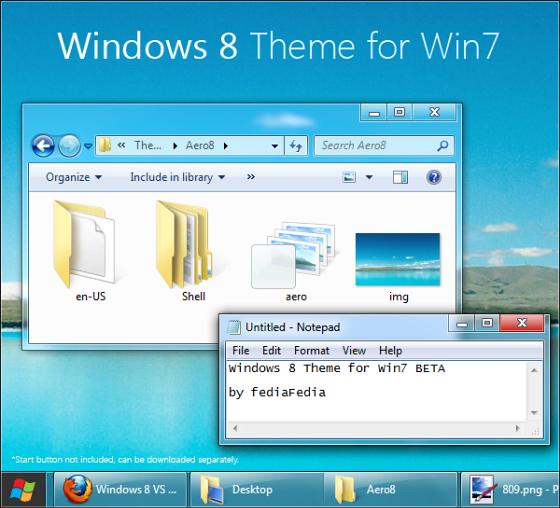 A new Windows 8 theme for Windows 7, based on this build, was released yesterday that lets you get as close as possible to Windows 8 while still on Windows 7. The recognition, for being the first one to do that, goes to DeviantArt user fediaFedia.

The style itself is VERY VERY simple, and nothing much has been changed. The only difference is how the frames look. I included the original aero.msstyles from Windows 8 if anyone wants to take a look at it. The theme for 7 includes the wallpaper from 8 also.

The most noticeable changes in this theme are the sharp corners on the windows, a lighter blue tone and a new start button/orb. The orb is not included within the theme but can be downloaded separately and applied using the start orb changing program.

We will be seeing a lot more Windows 8 themes shortly.