Windows 8 is not yet ready for prime time and no one knows for sure what the final release will look like, but whatever little information we could gather from screenshots, video previews and the occasional leak builds, was put together to create a premature Windows 8 transformation pack called Windows 8 UX Pack.

Windows 8 UX Pack consist of the Windows ‘Aero Lite’ Theme and UserTile in Taskbar, including logon screens. The pack is meant to be used on Windows 7. 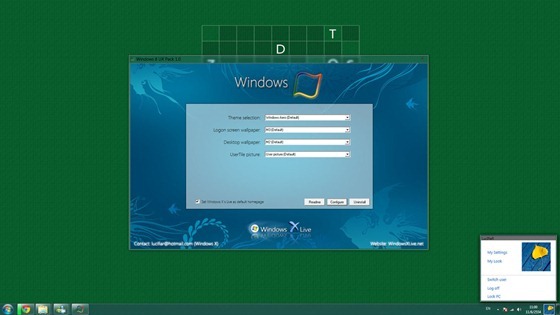 Windows 8 UX Pack will give you Windows 8 UI improvements such as theme and logon screen without touching system files at all so it won’t have such risk to harm your system at all. In this package, you’ll have Windows 8 inspired themes and applications to make your system resembles Windows 8 as much as possible without modifying system files.

Other customization packs from the same developer: