So I was trying to install Windows 8 Developer build in VMware Player and got the screen below. Apparently, the installation had failed. Initially, I thought this error message was from VMware Player, but upon looking closely I realized that it was from Windows 8. A trip to Google confirmed my suspicion. Windows 8 has a new BSOD a.k.a the dreaded Blue Screen of Death, only this time it looks less dreadful. 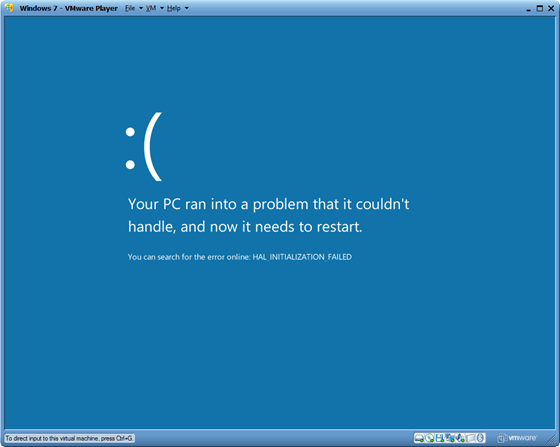 As you can see from the image above, all technical mumbo jumbo is gone. Instead, you get a sad face and a simple line asking you to search for that error message on the Internet.

While the new blue screen does look nice and less harsh, it’s not necessarily better. Previously, it was possible to get additional information such as the name of the offending file that caused the crash. With all information removed, users will now have to rely completely on minidump files or use third party tools like BlueScreenView to analyze the error.