The key change is, of course, support for HTML5 video creation. When this option is chosen, Freemake Video Converter prepares videos into three formats – Ogg Theora, WebM, H.264 and automatically generates all the code required to embedded the video into web pages. The user can then upload the converted videos to a webserver and copy the code and paste in on the page where they want the video to appear. 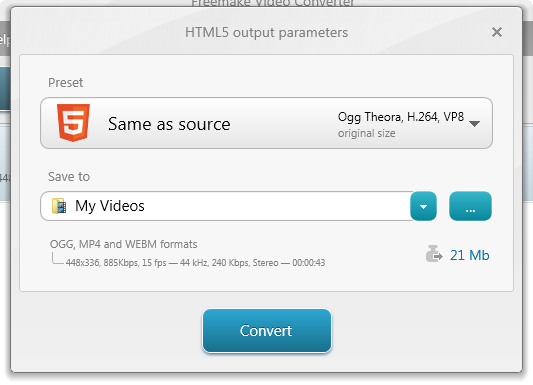 The advantage of using HTML5 videos is that visitors using HTML5 compliant browsers can play the videos without having to install additional Flash plug-in.

Version 3.0 has also added support for new mobile devices by Nokia, Samsung, and Blackberry. There are also two new presets for Android devices: 1280×800 and 640×480.

It has also improved the quality for lengthy DVD videos and subtitles display, and addition of MP2 audio codec for new DVDs enables users to save 5.1 channel sound when converting DVDs.