If you use Flickr to share your personal photos with friends and family, you have chosen the wrong platform. Flickr is for sharing photos with the world, not just your friends. It’s a place where you showcase your photography skills, discuss camera techniques and share your passion on photography with like minded people. It’s not for sharing photos of your personal life, and if you do that or even compare Flickr with Facebook you haven’t understood what Flickr is for. But back when Facebook didn’t exist, Flickr was the most popular choice and many long time Flickr users have many precious pictures there. Although there are several tools to download Flickr photos to your computer, there is no direct way to transfer them from Flickr to Facebook, until now. 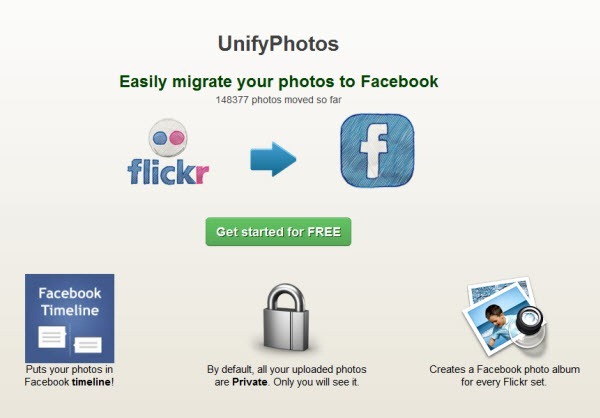 Once you’ve authorized your accounts, you’ll be shown all of your available Flickr sets to migrate. UnifyPhotos will migrate only sets of photos and not individually photos. Migrated Flickr sets become a new album on Facebook with its original name. The photos that are sent to Facebook are automatically set to private so you can pick which ones you’d like to share with your friends.

The transfer is not immediate as there are thousands of photos to be transferred; so you will be put on queue. Depending on how many photos you have on Flickr, it might take a few hours.

Related: Move Selected or Any Facebook Photo Album to Picasa