After years of waiting for Google Drive, an Asian company called Insync has unveiled a desktop synchronization tool of the same name that allows Google Docs users to use Google online storage the same way they use their Dropbox account. Insync has actually been around for more than a year, but only recently the service went free. The company has also rolled out a revamped version of its product, removed registration and sync limits and streamlined the user experience.

Insync doesn’t require any registration -  just sign-in into the site with your existing Google account, download and install the client, and associate your machine with your Google account. Insync creates a folder on your hard disk which uploads any file you drop into the folder to your Google Docs account. Any file created, uploaded or changed in Google Docs is also automatically downloaded to this folder. And this isn’t just limited to documents supported by Google Docs – any type of files can be synced including music, video, EXE and more. 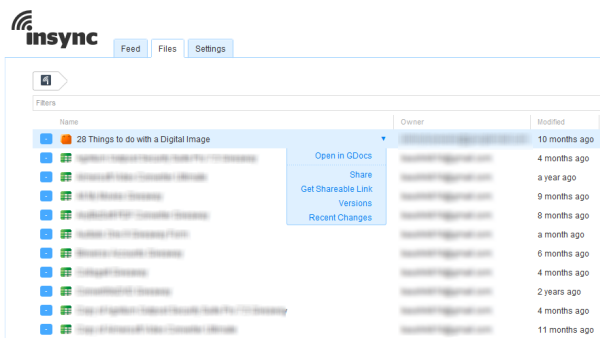 On first startup, Insync will download all files from your Docs storage to your computer. The program is accessible from the system tray when it’s running, and from there you can view the most recent documents that were changed or synced. You can change the location of your Insync folder, and you can even add multiple Google accounts.

Insync’s web interface is an alternative to Google Docs; although it’s not any better than the native Google Docs interface but it does make sharing easier by automatically generating goo.gl based short URLs.

The storage is provided by Google, of course, and the company has no plans to offer data hosting. Co-founder and CEO Terence Pua said to TheNextWeb:

We can’t beat Google’s storage prices so we don’t see the point of selling our own storage.

Although free Google Docs users only get 1GB of storage compared to an excess of 2GB on Dropbox, when one takes into account paid plans, Dropbox loses the price comparison with Google’s storage offering by 1:8. For example, $100 a year gets you 50GB at Dropbox but a whopping 400GB at Google. On Google, you can start for as cheap as $5 a year for a decent 20GB. You can’t beat that.