Raspberry Pi, the teeny-weeny microcomputer that was announced late last year, and the one that has amassed a huge fan following even before it was released, is finally available for orders.

The Raspberry Pi is available at either Premier Farnell or RS Components. Search for Raspberry Pi, and then follow the normal shopping and checkout process. Apparently, the announcement has caused a huge rush of buyers and both the retailer’s websites are down at the time of this writing.

Update: Both sites have sold out within minutes.

Those who have tuned in late, the Raspberry Pi is a small computer, no bigger than a credit card, running on 700MHz ARM11 processor with 256MB of RAM and with all essential connectivity options such as VGA ports, HDMI, USB, Wi-Fi and Ethernet ports.

The tech world is pretty excited about Raspberry Pi. For $25 or $35 you can get a fully functional ARM-based computer running a special version of Fedora Linux; all you need to do is plugin a monitor, keyboard and mouse. The HDMI output supports 1080p playback, and we have already seen videos of games being played on it. Raspberry Pi will be an impressive media center. 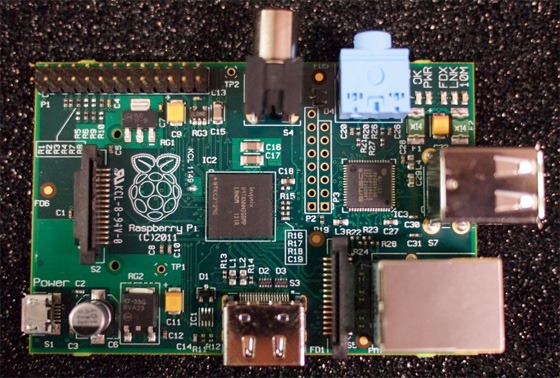 The whole things is also pretty damn small. Although you can’t use it without a monitor and keyboard/mouse hooked up, it’s still nice that you can carry it around and hook it up at home, at work, or in conference rooms.

All of the first units that are on sale are the $35 Raspberry Pi Model B. These are the more fully featured versions of the Raspberry Pi that include an Ethernet port, and 2 USB ports. The $25 Model A has been reworked to include 256MB of RAM – double than what were originally planned to offer – and will be going into production immediately.

This first launch is aimed at software and hardware enthusiasts, makers, teachers and others who want to build exciting things with the Raspberry Pi before the official educational launch, which will happen later in 2012.

The developers expects that when Raspberry Pi is launched into the educational market, there will be an experienced community of people using and making things with the Raspberry Pi. Software will be more mature and free of obvious bugs, and easier for children and educators to use.