For most people, a web browser is all they need. Email, Facebook and a little surfing is pretty much all they do. Whatever documents they create or edit can be handled by Google Docs and Zoho. For playing music and video you have a bunch of streaming sites. You can also setup your own music streaming service to play your music collection from anywhere. Did you know, you can drag a music file and drop it inside Chrome to start playing? But you can’t keep dragging every file you want to play. You need playlists, and if possible, a library.

So, here are three Chrome extension that turns your browser into a full featured music player.

Achshar Player is a powerful local music player built entirely of HTML5 and JavaScript. It can play MP3, WAV and OGG music, because that is all HTML5 audio supports. You begin by adding music to the player either by the drag-and-drop method or using the ‘+’ button next to ‘Music Explorer’. If you intend to use Achshar Player for some time, you might prefer building a library of your music. Achshar Player allows you to do that. 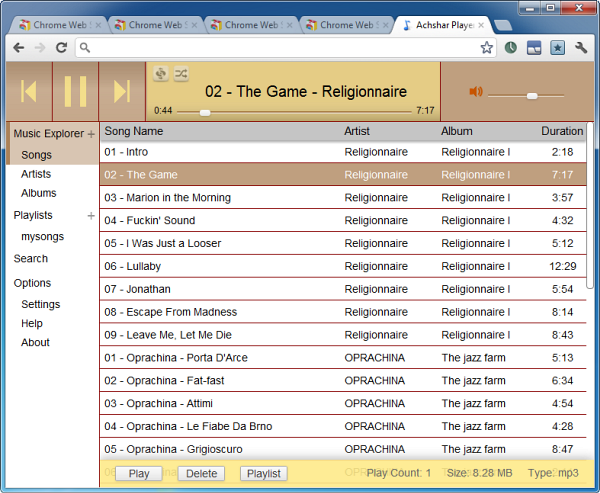 Once you add them, the music is automatically sorted by Song title, Artist and Album. You can play music directly from the library or add them to your playlist. Currently, the player will automatically progress to the next title only when played from the playlist, not when played directly from the library, which leaves some thing to be desired for. Shuffling the order of tracks within a playlist and repeating a playlist are supported. Achshar Player will also keep count the number times a title is played. It would have been nice if the player could utilize the stats to prepare a playlist of the most played tracks or something. 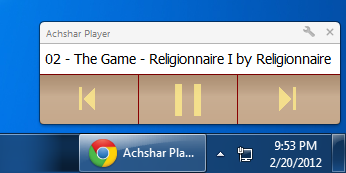 Achshar player is also a background app hence it will keep playing your playlists even after you have closed the app tab or even all the browser windows. This behavior is controlled by the ‘Background Apps’ settings in Chrome. You can switch this thing off, if it turns out to be annoying – I, for one, wouldn’t want the music to continue playing after I’ve closed the browser/player.

The app has multiple color themes. Along with predefined colors, you can paint the app in a the color of your choice by entering the HEX or RGB values.

Now what good is a Chrome app that can’t share what you are listening to your social network? Achshar Player allows users to share their current song along with album and artist info on twitter. Mew-Zik is a simple MP3 and OGG music player. It can’t play WAV files, so no music CDs for you. It supports music library and playlists. The library doesn’t group songs by artist or album, but there is a sorting feature. You can drag and drop to reorder songs within a playlist, but there is no auto-shuffle.

The player has an overall good interface, but feature-wise grossly inferior to Achshar Player. The only reason you might want to use Mew-Zik in place of Achshar Player is if you want to view the lyrics of the song that is currently playing. 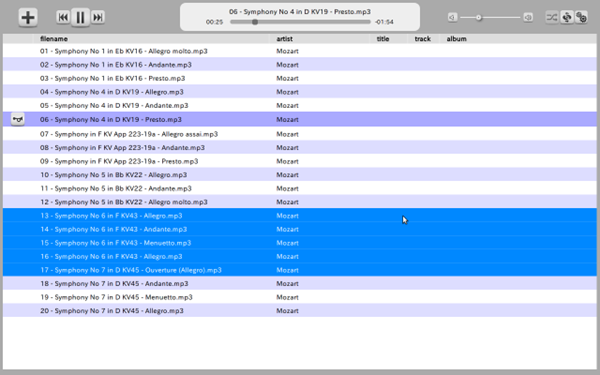 At the time of this writing, I’m not able to install Local Player. The developer may have recently updated the extension, but unfortunately uploaded a broken file. As such, I’m going to rely on the developer’s description of the app.

Usage: Drag mp3/ogg files from file browser into the window, or add music files from a file dialog, which appears when you click the ‘+’ button. The player will automatically start to play the file.

This is the only Chrome-based media player that plays AAC, M4A and MP4 video files, over and above MP3 and OGG. There is no library feature, as far as I can tell.