The Indie game scene has seen a surge in the last few years primarily due to availability of new online distribution methods and social media for publicity. There are probably thousands of indie games developed by now, some of which have gone on to become an Internet phenomenon such as Minecraft. It’s hard to keep track of how many such games are released in a year because of the very nature of Indie games. One way to keep yourself abreast, if you are a fan of these small games, is to follow blogs dedicated to Indie gaming. Another way is to install Tiggit.

Tiggit is a an open source game installer and launcher, like Steam. The biggest difference, aside from the fact that they’re not operated by Valve, is that Tiggit was built to serve only indie games. According to the website, Tiggit’s mission is to help users find all the awesome indie games that exist ‘hidden’ around the internet. As of now Tiggit only provides freeware games and demos. So there will no sales or anything. 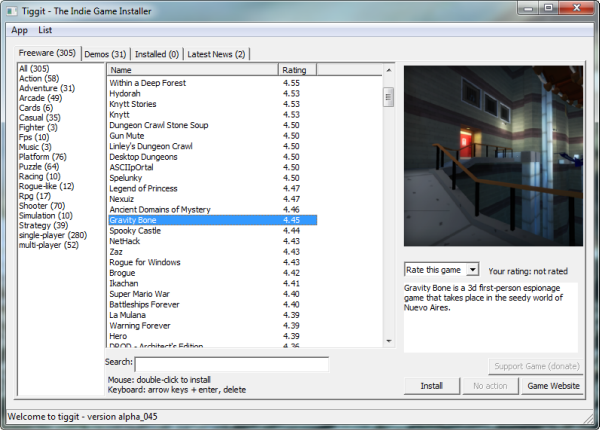 Currently, Tiggit features over 300 freeware titles and 30 odd playable demos. The games are categorized according to the genre; single-player and multi-player games are also grouped separately. You can sort the games by rating (although it is not clear from where the ratings are sourced) and there is a search box for easy finding.

Each game is accompanied by a short description and a screenshot. A one click install button ensures that you don’t have to manually visit the game’s website to download it. Tiggit does not require users to register an account. You simply install the program the launcher and enjoy.