Industry leaders are now starting to see biometrics as a viable alternative to passwords. Android 4.0 Ice Cream Sandwich has an optional Face Unlock feature that employs facial recognition software to unlock their phones instead of hassling with the traditional pin codes or pattern unlocks. Apple is also rumored to be working on facial recognition for their Mac operating system. Windows is not likely to have native biometric authentication any time soon; Windows 8 does include a pattern password feature though.

But Switzerland based software company KeyLemon has been offering affordable (and free) biometrics security software for personal computers for the last 5 years. KeyLemon offer a simple and convenient solution for users to login to their Windows computer and other web services using their face instead of a password. 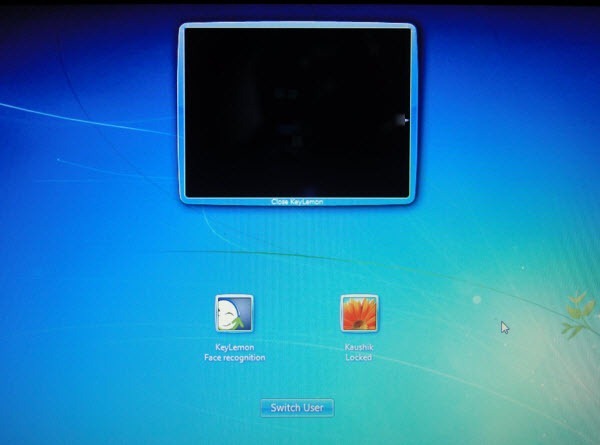 Under good lighting condition, authentication takes barely a second allowing for quick logins that isn’t possible with tradition password based login. If due to bad lighting or some other reasons, KeyLemon fails to identify the user, the program allows the user to fallback to the default Windows password based login.

KeyLemon has been reported to be easily fooled by a smartphone recording of the face of the user. This is true, but the success or failure of this depends on the trade-off the user made between convenience and security when configuring KeyLemon. The program offers three security level – High, Medium and Low. 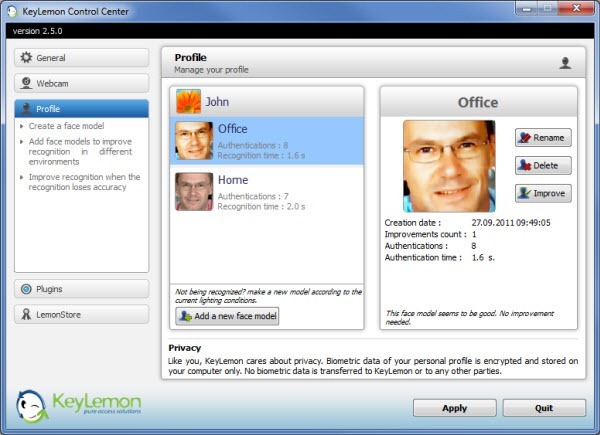 High security offers maximum security with accurate facial recognition. A high level of correlation is required for authentication which demands adequate lighting. KeyLemon cannot be fooled by a video recording of the user’s face at this security setting. In the Medium security setting, a compromise is made between ease of use and authentication. At this setting, KeyLemon tends to get duped when a video recording of the user’s face is held in front of the webcam. The Low security setting offers the lowest security and should be avoided. At the lowest setting, even a still picture of the user can unlock the computer.

However, to prevent spoofing KeyLemon includes an anti-spoofing technology. When this is enabled, the user is required to blink his or her eyes to unlock the computer. The blinking action also needs to be made at a certain moment when the anti-spoofing icon lights up. This makes spoofing nearly impossible since not only the intruder will need to acquire a video of the user blinking but he or she needs to make sure the whole thing is accurately timed when played back in front of the webcam.

With anti-spoofing enabled, even the Low security level can provide adequate protection that cannot be easily bypassed.

KeyLemon includes several plug-ins that enhances the program features, but unlike traditional plug-ins, they come preinstalled with the software. Currently four such plug-ins are available and they offer a range of interesting features.

The LemonDay plug-in allows one to archive every picture of himself or herself the webcam takes at logon and then stich them together to create a glorious time-lapse video. This is a fun way to track the evolution of one’s face with time.

The LemonLogin plug-in allows one to use themes on the logon screen and personalize it with their own background pictures.

The LemonLock plug-in automatically locks the computer when the owner is not in front of the computer. If an unauthorized person tries to use the computer there is an option to take a picture of them.

LemonFox is another plug-in that installs an add-on in Firefox that enables users to log in to three social-networking services using their Webcam. The supported websites are currently Facebook, Twitter and Linked In. 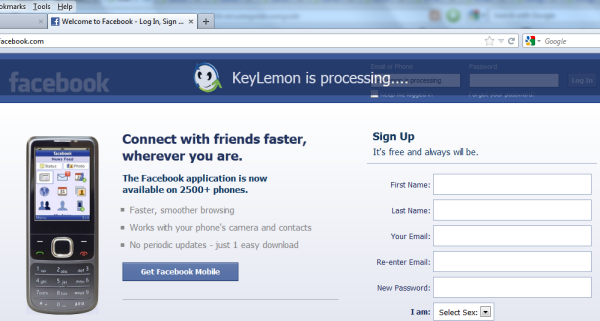 To login into the social-networking simply open the supported website and KeyLemon will launch authentication. If facial authentication is successful, your login credentials are searched in the login manager of Firefox. If they are not already stored, a window asks you the credentials. Once you’ve entered your login username and password, these are stored in Firefox’s password manager. The next time you open the website, your face will be scanned and only when the authentication succeeds, you will be logged into the website.

KeyLemon comes in three flavors – Basic, Bronze and Gold. Basic is free to use but contains only Windows login with majority of features locked. Bronze contains more features than Basic but still lacks Hijackers Tracking, Security Levels, Anti-spoofing and LemonFox. Bronze is priced at around $20. The Gold version is the complete product and costs twice that of Bronze.

Thanks to KeyLemon, we have 5 Gold licenses to giveaway to our readers. If you are interested in entering this giveaway contest, simply leave your real name and email ID in the form below. Winners will be selected by a random draw. The contest closes on 22 July, 2012.