Can’t decide which movie you should watch next? Try FlickChart, a website that allows you to rank movies and create your own personal chart of favorites, browse movies ranked by others and discover new movies to watch. Flickchart offers a unique way to rate movies. Instead of rating movies in a scale of 1 to 10, two movies are pitted against each other. You pick the one you like the most, and two new movies go head-to-head. If you haven’t seen one of the movies, click a button and the movie is replaced by another movie. If you haven’t seen either of the movies, click another button and two new movies will lock horn.

As you rank movies, a list of your top 20 movies starts to take shape. The more movies you rank, the better the list starts reflecting your tastes. Eventually, you get recurring movies in new match-ups. Say you like The Terminator better than The Dark Knight, but you like Back to the Future more than The Terminator, then you like Back to the Future better than The Dark Knight too and so it appears ahead of both. 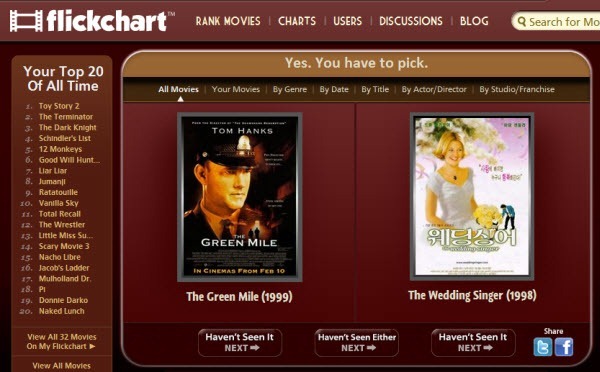 But what do you do when they pit Little Miss Sunshine against The Usual Suspect? Both are great movies but how does one choose between movies of two different genre? To avoid such conflict, you can filter the movies based on genre, release year, decade, actor/director, and studio or leave it open to compare any movie with any other.

Once you’ve ranked enough movies to create a list of movies you have seen, you also build up a complementary list of movies that you haven’t seen. This list contains movies that have been favorably ranked by the FlickChart community and it’s a pretty good place to start debating which to watch next.

FlickChart classifies movies by extremely narrow genre, which is one of the strongest feature of the website. Instead of board categories such as thriller, drama, action and romance, Flickchart uses very narrow genres. Some examples of genres used by Flickchart are: Action comedy, Adventure comedy, Apocalyptic film, Court room drama, Disaster film, Girls with guns, Glamorized spy film, Unglamorized spy film, Jungle movie, Road movie, Whodunit, Satire etc. Aside from genres, Flickchart also knows the actors, directors, and release dates of all the films, so you can further break down the list into any combination you choose. 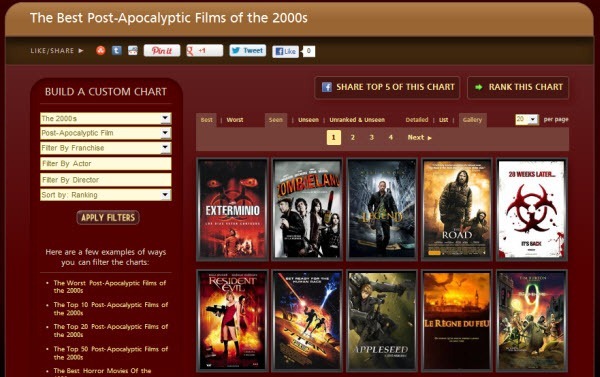 Ranking movies in FlickChart is so addicting that it’s not uncommon for users to tirelessly continue ranking movies for hours at a time. The founders told Mashable that “10% of all site visitors come back more than 200 times, and 60% of all visitors are repeat customers. Better yet, they say, there’s a sizable chunk of Flickchart’s user base who have accumulated more than 300,000 rankings a piece.”

One of the drawbacks of the site is the lack of any meaningful information about the movies themselves, apart from the cast and director. So if you want to checkout why a movie is so loved (or hated) you’ll have to rely on another website like IMDB or Rotten Tomatoes.